Therefore this is a far from fresh look; but even so, though I may be silver I am not stale yet, because despite everything, I have NOT got off the bus . . . still FURTHER . . . I sit hunkered down in a cafe on the edge of Edge City and I finish it for the second time, an old friend . . . The Electric Kool-Aid Acid Test . . . Vale Tom Wolfe 2018 ::::::

I love reading for its own hallucinatory power. Even so there is only a handful of novels that have grabbed me by the synapses and thrown me against the wall. Melville’s colossal Moby Dick; the pure dread of Janet Turner Hospital’s Oyster; Burgess’ dystopian fairytale A Clockwork Orange; Thompson’s terrifying and hilarious Fear and Loathing in Las Vegas (my first adult book, 1979) and more recently the mad The Sell Out by Paul Beatty.

And of course Tom Wolfe’s The Electric Kool-Aid Acid Test.

This became more than a book to me . . . more a template for my work as an agitprop performance artist prankster

This became more than a book to me and way beyond any sort of bible . . . beyond catastrophe . . . more a template for my work as an agitprop performance artist prankster through the punk years of the late 70s to the dreadful yuppie 80s and the Generation of Swine, to the present-day swamp that is the New Dumb.

I am by no means a student of Tom Wolfe. There are many of his works I ain’t read, but maybe it was my childhood desire to be an astronaut, or maybe it was my late teen desire to rebel that drew me to Wolfe and The Right Stuff, his expose of the early American Space Program, and The Electric Kool-Aid Acid Test, his expose of the early American LSD program.

Both books dealt with opposite ends of the American Dream. The Super Straight world of the American Astronaut to the Super Freak world of Ken Kesey and The Merry Pranksters. Both these subjects have informed all my work as an artist, from the sheer prankster joy of bringing civil disobedience to the stage, and the daring bravery that is necessary to take a revolutionary stance while all around the innocence and enlightenment of the 60s and 70s was being stomped by Thatcherism and Reaganism and the reactionary world of profit and the free market. 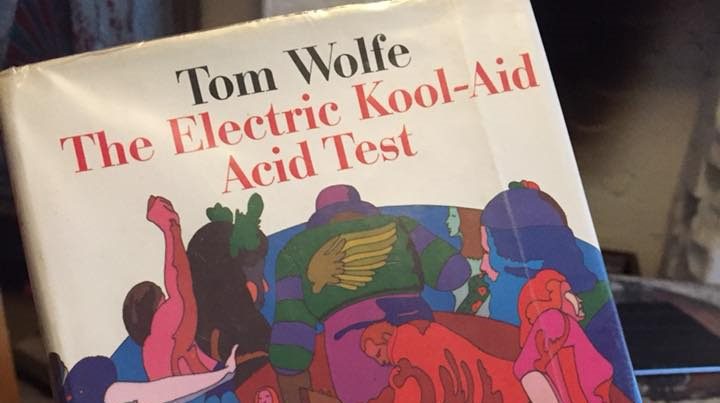 Tom Wolfe dies . . . immediately I am moved to read The Electric Kool-Aid Acid Test again. I was gifted a first edition copy by my wife Cathy this century as she, more than anyone, was aware of The Merry Pranksters and Ken Kesey’s influence on my work. Almost simultaneously this very mag, Silver, approached me to do a review of this classic. In the early 60s in the world of Tom Wolfe’s masterpiece this would have been called ‘beyond coincidence’ — the ‘collective consciousness’ — ‘intersubjectivity’, BUT cynical old 21st-century me knows it’s because I posted condolences to Tom Wolfe on Facebook.

No need for Cosmic Collective Consciousness, our metaphysics has been turned inside out like a gutted animal . . . it’s called the social network . . . nothing cosmic about algorithms . . . pure mathematics . . . like rolling news . . . rolling soullessness 24/7. . . DM me.

So . . . a review . . . Ha! I can honestly say I have never seen a review of the Bible or the Quran or the Torah or the Talmud or the Tripitaka or the Upanishads. They are taken as read. As an Anarcho-Utopian Neo Pagan, The Electric Kool-Aid Acid Test is sacred text . . . a masterpiece of New Journalism that looks at the transition from not only beatniks to the birth of hippy, but also the very discovery of LSD itself and its mind expanding abilities to reopen the human doors of perception that modernity was quickly fusing shut with a slam.

An amphetamine-fueled, embedded ride on Ken Kesey’s Magic Bus as it careened and giggled in and out of control down the metaphysical superhighway of modern America

For the new psychedelic generation, Tom Wolfe had quite literally created the beatnik Kerouac’s On the Road on acid. An amphetamine-fueled, embedded ride on Ken Kesey’s Magic Bus as it careened and giggled in and out of control down the metaphysical superhighway of modern America . . . It is a trip, an innovative literary masterpiece capturing those heady Head days of the American Freak that would eventually seep into the collective consciousness of a whole generation and spawn the Hippy Movement, a movement that had the power to warp culture . . . The Counter Culture . . .

The reading is all about the genius and bravery of Wolfe to create his own style, an amphetamine stream of consciousness spiked with LSD. Joyce on Acid . . . and by God, hang on tight . . . because it takes all ones intellect and spirituality to Keep up . . .
. . . Keep up
. . . Keep up… 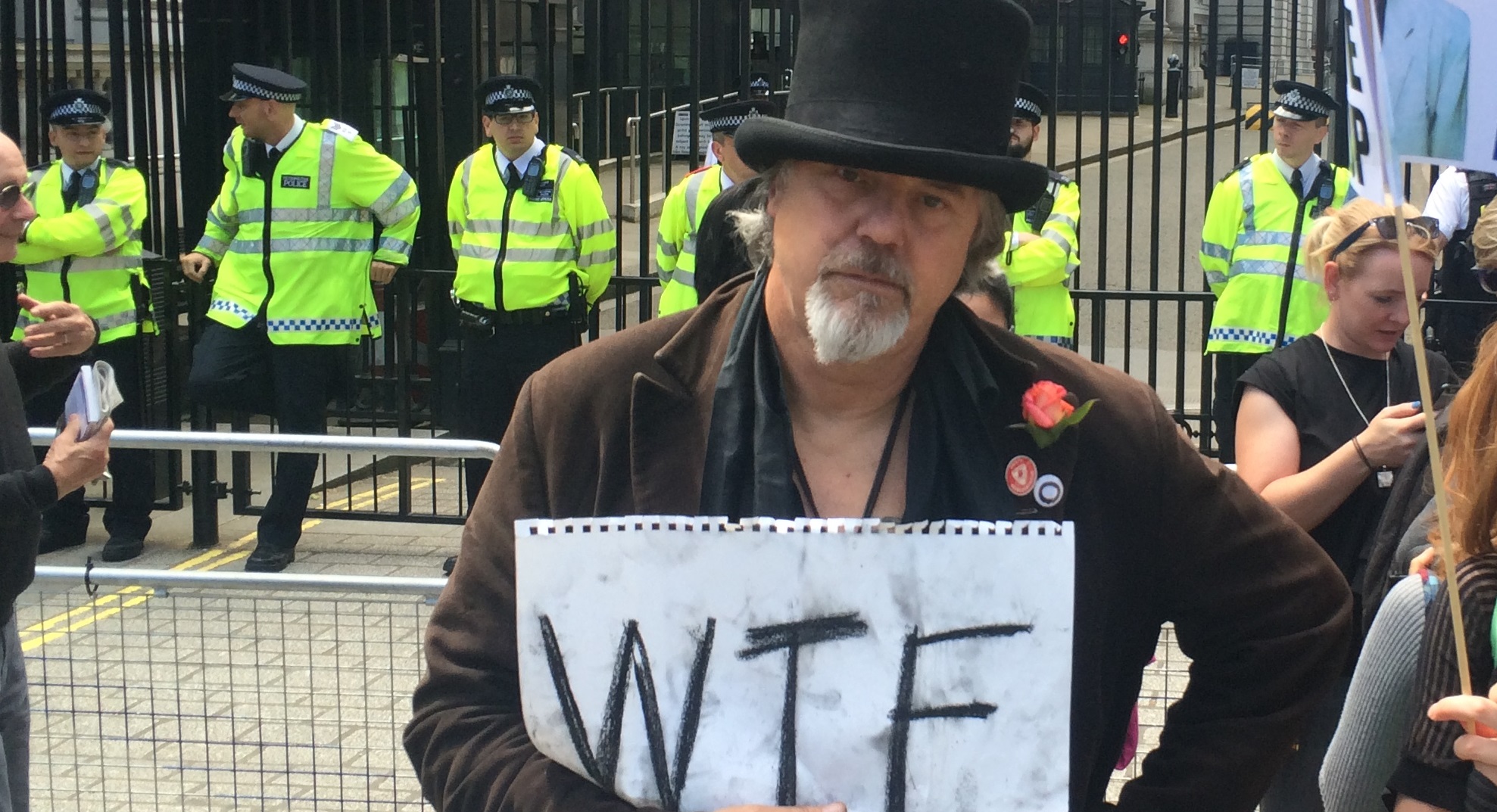 I was born in 1959 and I have never identified as a baby boomer. As a late ‘boomer’. I identify more as a punk than a hippy of yore. Except for these hardcore frontier people, these hipsters who stir a similar feeling that punk did for me as a teenager.

Brave, adventurous pioneers with a sense of danger and fun as they ploughed new cultural furrows. The Electric Kool-Aid Acid Test is a story of daring

Brave, adventurous pioneers with a sense of danger and fun as they ploughed new cultural furrows. The Electric Kool-Aid Acid Test is a story of daring by those who dared. Only by daring in the face of the Right can they wipe away the smear and the ugly stain of fascism that was seeping back into the culture. Wolfe’s book also comes with a warning. BEWARE THE NEW RIGHT. . .They will stomp or steal every nuance the counter culture creates.

So if you haven’t already, come and meet The Pranksters, Babbs, Hassler, Mountain Girl, The Hermit, Gretchin, Mal Function, Cassady (the driver), Augustine Owsley Stanley the Third (the Chemist of the World’s most righteous acid of the day), and of course, Chief Broom, Ken Kesey himself, as he hovers over the cuckoos’ nest as the Neil Armstrong of LSD aboard an old 1939 International Harvester school bus daubed in Day-Glo paint and innocence.

The Pranksters shake the very foundations of conservative modern America off their gourds on LSD, speed and marijuana. It is a trip . . . not only a trip down memory lane but also a trip of possibilities for a future rebellion against the new modern conservative America . . . 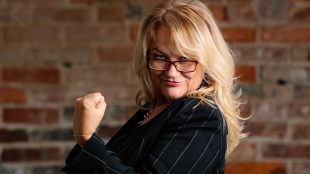 Don’t tell me what to do!