If you want to engage in a Saturday night activity where the assembled group yell things like, “My cream is in”, or “I keep eating bits of beef,” then this is for you.

I love to cook, and I love to eat. So when the team behind ‘Chef Simon McKenzie’ asked me if I’d like to try his new live cooking date on a Saturday night my nostrils quivered immediately.

It’s a fairly new venture – Simon is a real chef, and like many chefs, not super busy right now, so the idea of doing a live cookalong thing is clever. Food-focused muggles like me get to make a lovely meal alongside a proper chef. Plus *bonus* a delicious, fancier-than-normal meal at the end, and a sense of smug satisfaction. One hopes.

“Doing Stroganoff this week,” said Nick Mosley, who was the one to get in touch. “Do you want to do beef or chicken?” Not exactly a difficult question. Beef, I said. And lo, on Friday afternoon, the lovely Julia Claxton dropped my bag of food safely at my front door.

What’s in the bag?

Mostly ingredients. There is an instruction sheet, and a little handwritten postcard from Simon, which is a nice touch. And a teatowel. There’s no recipe/method included, on purpose. But there is a list of stuff you need from your kitchen, and directions on how to join the Facebook Live. 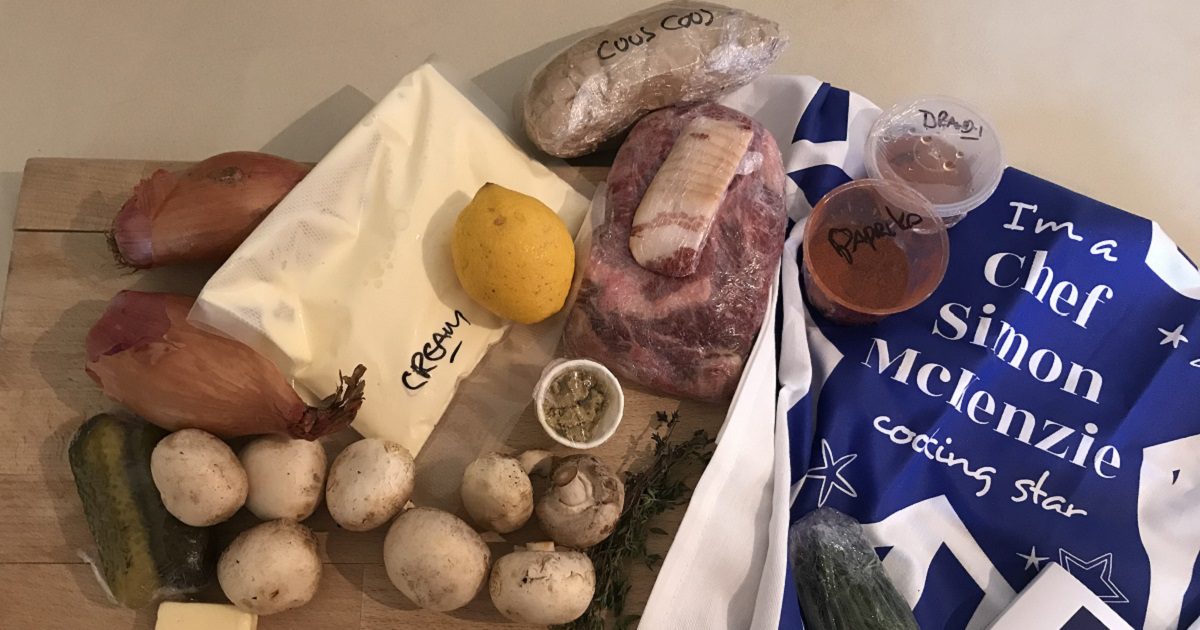 Everything seemed packaged up pretty safely – there was a little pot of brandy, a bag of cream – that kind of stuff, and no leakages. Things were wrapped in cling film though, and it did feel like maybe sealed bags would be better, if only for the meat. More important if I’d had chicken or pork I guess, but still.

The ingredients are really fresh, and of excellent quality. Couldn’t fault a single thing in the bag – the beef particularly was impressive. So fresh, I ate a raw chunk whilst I was chopping it. I’d have loved to know where the foods came from – are they local? Organic? Free range? Maybe something to add to the included notes?

How does it all work?

The premise is really simple. There’s a list of things you need on the enclosed sheet (2 x frying pans, sieve, chopping boards etc). And you simply get your kit together, log on to the Facebook Live at around 6.10pm, and wait for everyone to arrive. Then he kicks off and you cookalongaSimon, usually at around 6.30pm. 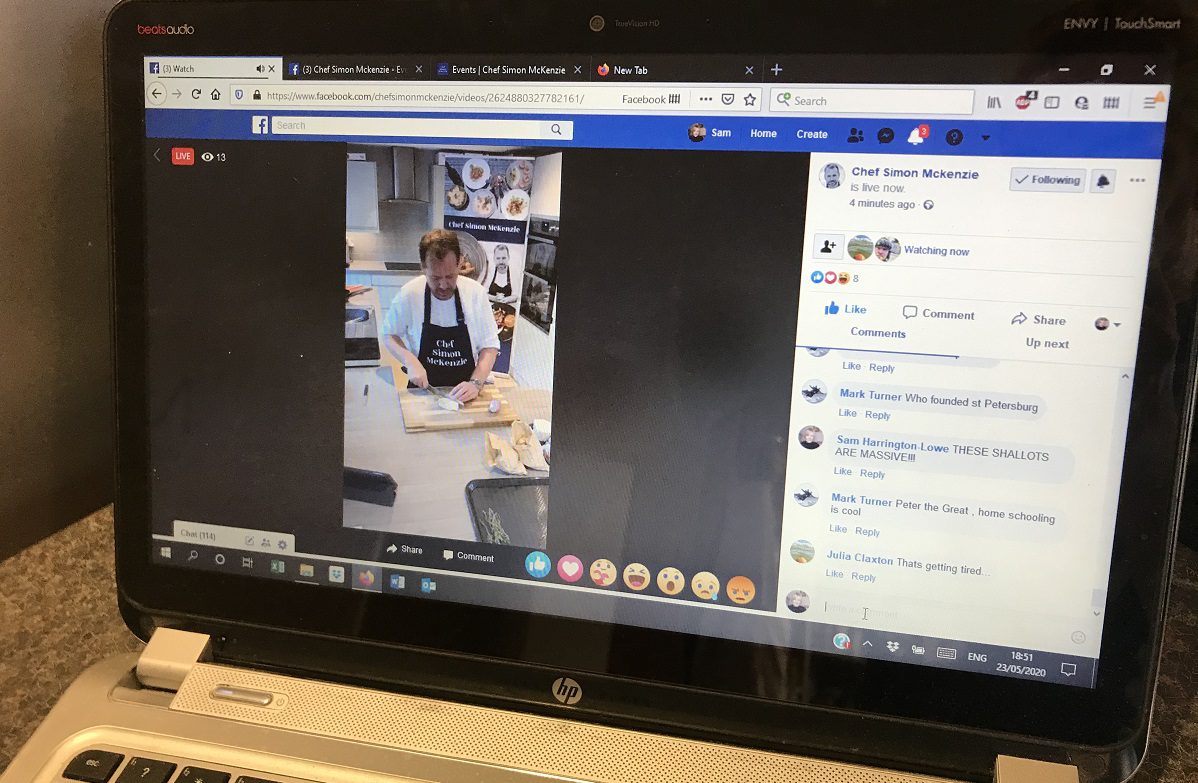 It’s a good idea to have your kit ready, and to have unpacked everything before you start. Simon’s partner Aisling monitors the comments, and handles the camera work – we get some zooms for close-ups, for example, although the whole live is shot on a single camera. It’s a clean, simple setup.

What’s wrong with it?

I’m going to do it this way round because I want to finish on the positives – and this was overall a really positive experience. But there are some issues.

Firstly and most obviously, connectivity. I lost connection two or three times, and it was glitchy occasionally, and I have superfast fibre at my gaff. So that’s something to be aware of.

Also, because it’s shot on a single device (I’m going to guess iPhone) without a mic, I really struggled to hear him. Especially once I was cooking and there were sizzling noises my end. Also, speaking personally I prefer to watch video in landscape, but perhaps it’s impossible to get all the action in shot that way round. Lighting is quite bleak and the tech felt a bit basic. We are all so used to video quality around food being high these days, so it feels a little unpolished.

Cooking along at the same time would work better if everyone had the same amount of food. I had a kit for four people, and it simply takes longer to dice for four than two. I found myself playing catch-up a fair bit. Also I missed a couple of instructions partly because I couldn’t hear, and partly because I was behind. 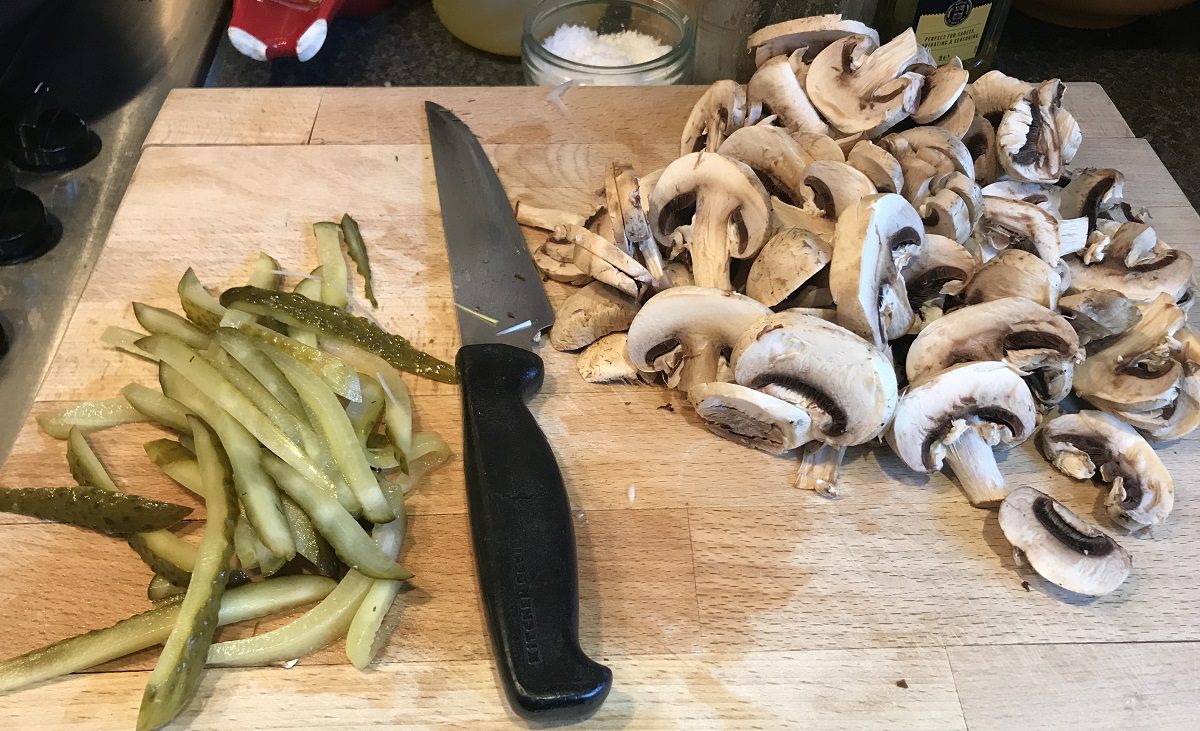 There was one point where he cooked the beef and did the flambé and suggested we watch him first, and then do it afterwards. And I can’t help thinking that maybe that’s a better way of doing it all. So rather than all trying to do it at the same time, we watch him and then take our turn? 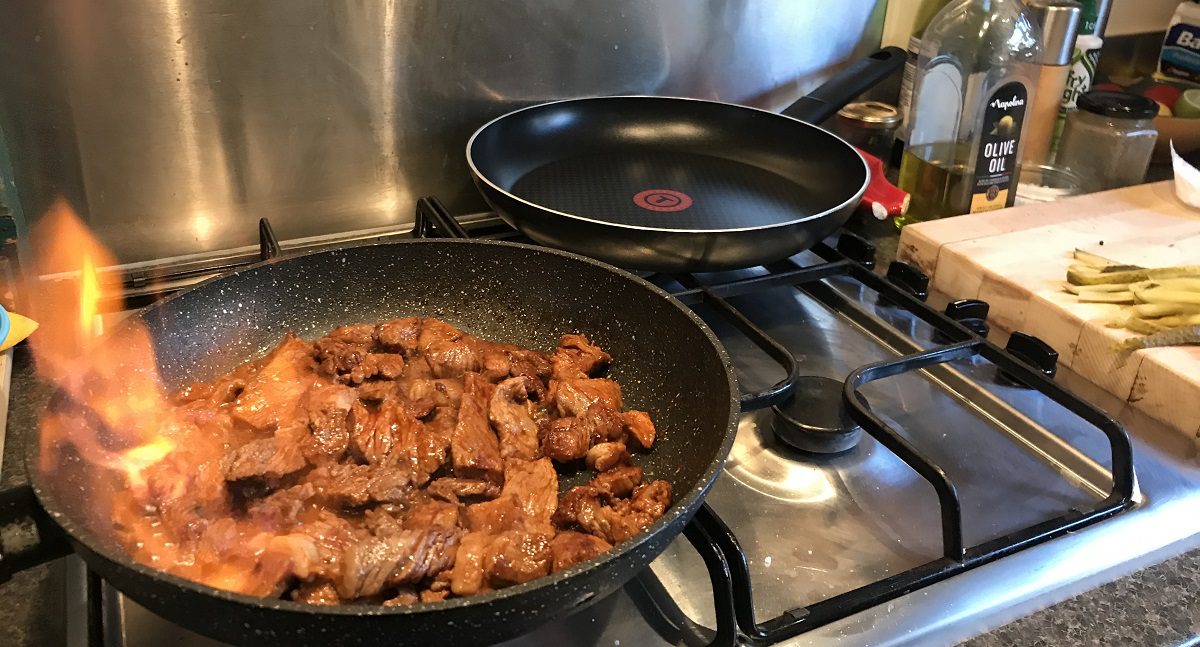 Check out my flambé!

It’s also really hard to ask questions and type when you’ve got sticky food-covered fingers and no time. The live banter would be improved, I think, if the chef and the cooks took turns. You’d have time whilst you were watching him. And then he’d have time to respond whilst you were doing your own cooking. Doing everything all together is a bit frantic.

The list of equipment didn’t mention a lighter or matches, although it is in the ‘stages’ part on the reverse of the sheet. So when it came to flambéing the beef we had a mad scramble looking for a lighter. Also there’s mention of a QR code for help joining the Live, but that isn’t on there either. So maybe some double checking on the sheet would be useful.

What’s right with it?

So although this is a slightly hectic way of cooking, it’s really good fun. There are comments coming in from other cooks, and there’s a great sense of all being in it together.

Simon is really likeable, and comes across well. He does a good job of looking comfortable in front of the camera although I suspect he’s strapping that on a bit. But his corny jokes and obvious passion for the food make him a genial host. He’s also, y’know, easy on the eye. Am I allowed to say that?

When I could hear him properly, he was generous in explaining how to do things – cut this thing 2mm thick, cut the meat this way, freeze your pancetta for better slicing results etc. So if you have the time to hear him, he’s giving away some nice little tricks of the trade and nuggets of cooking gold.

Delving back into the way it flows – I really enjoyed hearing him talking in a more sciencey way about the food, and wish we’d had more time for that. He spent some time explaining why he was using double cream and lemon juice instead of sour cream, for example. And some really supportive advice about methodology going along. You could learn a lot doing regular sessions.

All in all I had a really fun time, and the end result was great.

How was the food?

So the end result was Beef Stroganoff, cous cous, and French beans with shallots and pancetta. And it was delicious. 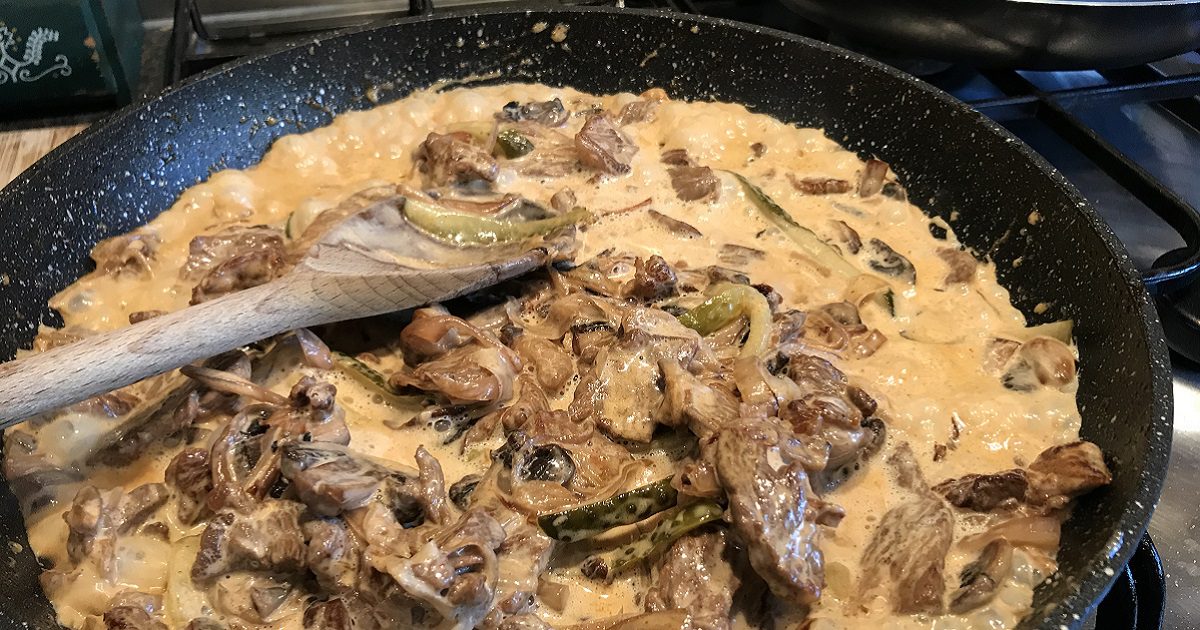 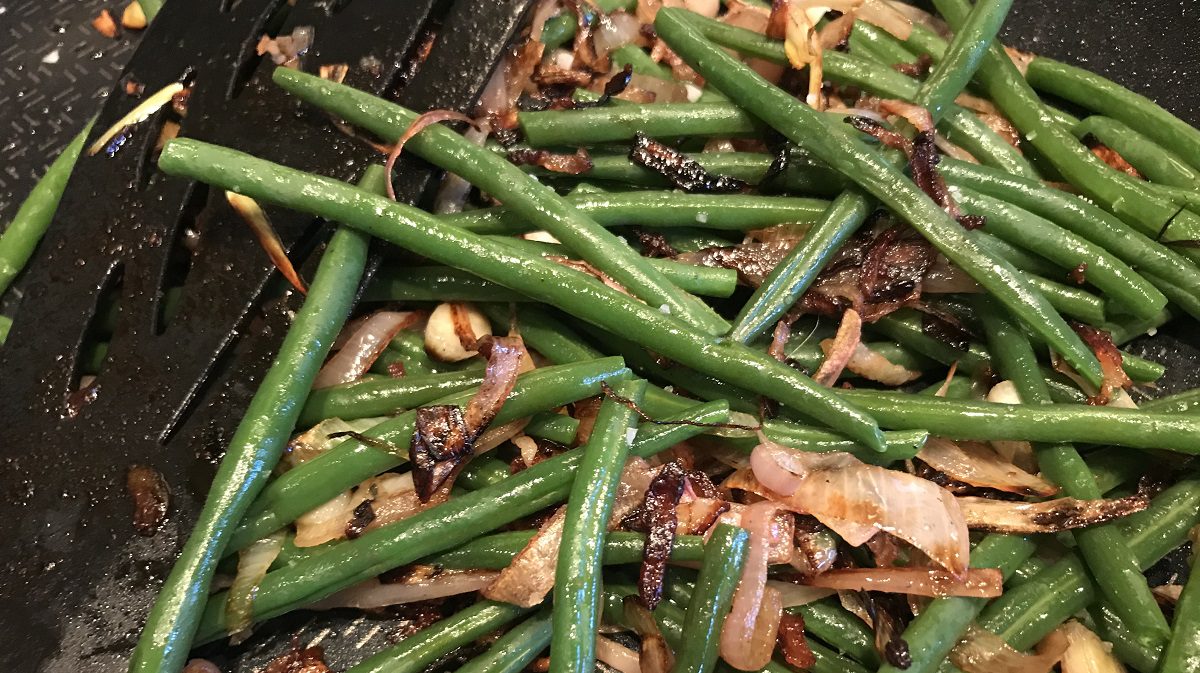 Green beans with pancetta and shallots

Ultimately we ended up with a really lovely meal. And I learned some really nice little tricks along the way. For example how cous cous (misery sand, for Peep Show fans) is transformed by using some stock and fresh thyme in the water. We were all pleasantly surprised in my house by how much difference that makes.

The meal was delicious, the quality of ingredients really helps with that. My Live froze literally as I was plating up but I didn’t care by then. We were too busy shoveling it in.

Other things to mention…

This was a round trip of about 2.5 hours in the end, so be aware of that if you’re starving!

I see that the live is also on Instagram, but there’s no mention of that on the instruction sheet. It’s also shot on a different camera for that, which I thought was at a better angle. And if you miss the fb Live you can still use your bag of food by watching it on IGTV afterwards. It’s also available to watch on Facebook afterwards too.

I didn’t buy a ticket in the usual way so maybe cooks get sent that kind of information when they buy the tickets. I’m assuming when you buy your ticket you get a bunch of info emailed to you. If so, ignore me. I’m flying blind here a bit.

Also I looked but there doesn’t seem to be any kind of option to share your results and hashtag it? There’s a competition that’s something to do with the teatowel which I heard about for the first time once the Live started, but I still didn’t quite understand. (I found it on the Insta account in the end; post your finished dish with the teatowel on Simon’s fb page for a chance to win two free meals).

But no specific hashtag? For a food-based activity on social media I think this is missing a huge UGC/marketing opportunity. Also you have to actively seek out and look at the Visitor Posts on the Facebook page to even see them. This thing could use a bit more user showboating I think; be great to see everyone posting their own results on their own feeds with a unique hashtag.

Would I do it again?

Absolutely. It was a bit hectic, and there was shallots and mushrooms and chopping boards and stuff everywhere at the end! The kitchen looked like a bomb had hit it. You’re cooking at someone else’s pace so there’s no time to clear up as you go along.

But the whole thing was great fun, and the food at the end really was super tasty. It’s a dish I’d never normally think of making, which is a delight. Just having someone else tell you what to cook for a change is lovely (parents everywhere will understand that one). And having it all measured out for you was also great. 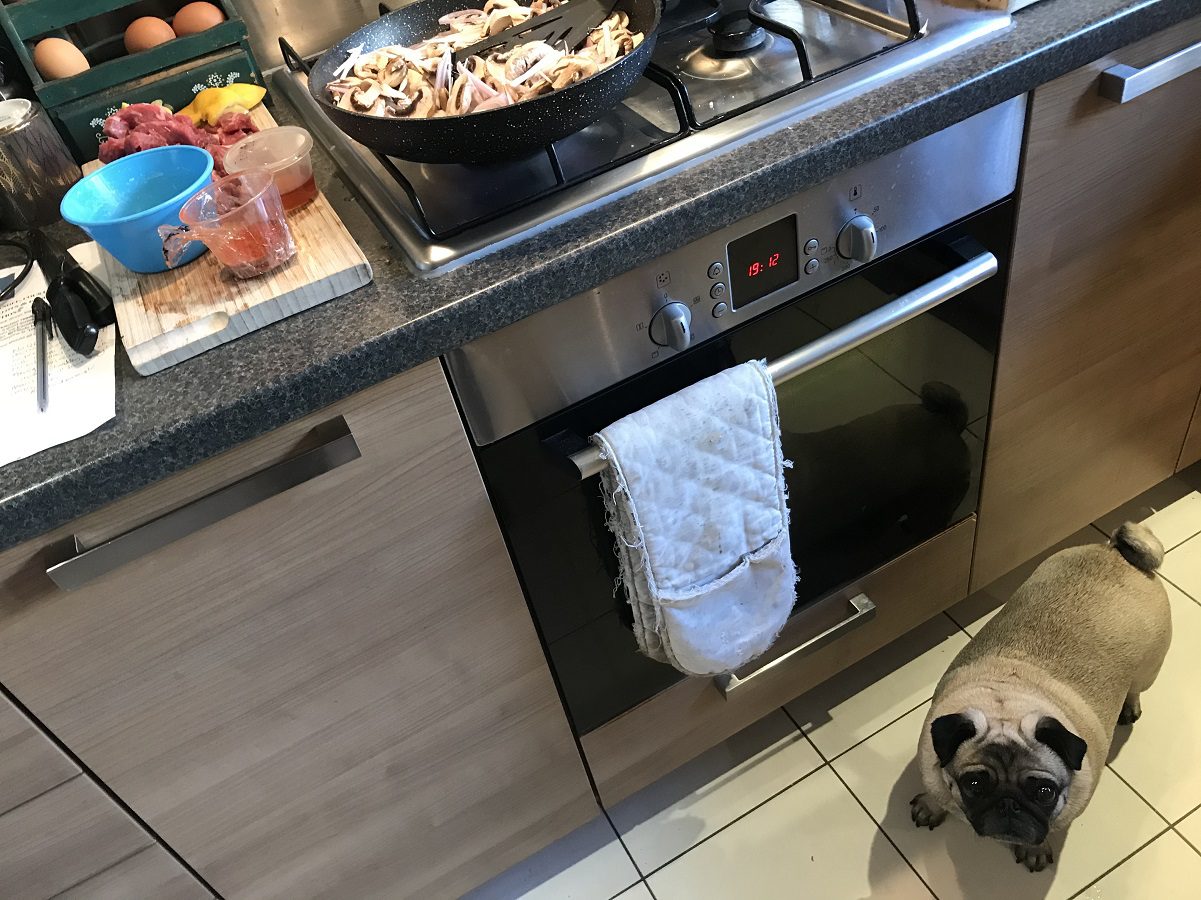 I did this on my own (unless you count Alice pug) but I suspect it might be more fun with two of you. You can play tag, watching and listening in (and commenting and getting involved) – and then doing cooking and prepping as well.

All in all it’s a fun night in on a Saturday and is exceptionally good value for money. Essentially it’s a tenner a head plus delivery (varies depending on where you are). Right now you can do Brighton area, Henley and Newbury. It’s not UK-wide yet but they have plans to expand it. Keep your eyes peeled. Some amazing recipes coming up in the weeks ahead.