Proving yet again that you’re never too old to try something for the first time, at 97 Iris Apfel has been signed by agency giant IMG Models.

You’d think, wouldn’t you, that from the coverage and popularity she’s enjoyed, that someone else had been working on this already, but no. She’s done everything she’s done so far herself. Having dubbed herself an ‘accidental icon’ for years, she’s finally decided it’s a great idea to let someone else organise her life for her!

On set at @hsn yesterday sharing the Iris Apfel Barbie as well as my book, Accidental Icon. Always a pleasure! xo

Speaking to Women’s Wear Daily (for whom she used to work when she was younger), Apfel said “I’m a do-it-yourself girl. I never expected my life would take this turn so I never prepared for it.” She has a long career in the rag trade, although her university career was art-based, attending art school at the University of Wisconsin and then reading art history at the New York University. It was probably her flair in this department that has ultimately made her the walking work of art she is.

She launched her own textiles firm back in 1950 with husband Carl, which they ran until 1992, traveling the world together in their pursuits, where she invested in pieces of non-Western, artisanal clothes. She often wore these clothes to clients’ high-society parties, bringing some pizzazz to the proceedings.

Who would think I would be a 97-year-old cover girl?!

And now a modelling career beckons. “I enjoy it very much. It’s very tiring. I can see why they get paid big bucks,” she said to WWD. “It’s great fun. I like it a lot. Who would think I would be a 97-year-old cover girl?” 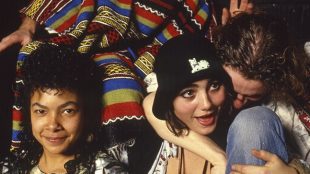 Continuing our celebration with the second Summer [...]