Each week I’ll be asking someone what their corona-experience has been like, from their lockdown life, to the new habits they’ve picked up. This week Denise Welch takes a break from filming Dun Breedin’ to talk to me…

When did you first know this was going to be a big deal?

When I was told that it was okay to go to Tenerife. And so we went, got there, got out in the sun, and then told that Spain was going into lockdown, and we had to come straight back.

The first concession I made to the pandemic was coming back from a Tenerife holiday that I was desperate for after one day!

I refused to panic shop. I want to scream in shops at Christmas when people do it, and I couldn’t understand the toilet roll thing. Also, I have enough fat reserves to go a couple of days without bread.

Who’s in your house?

Do you even get dressed any more?

I get dressed from the waist up, and I try to film and do Zoom above the chest to avoid having to wear a bra, which I would happily never wear again.

How are you stopping yourself from going mad?

I haven’t had to stop myself going mad because I’ve actually enjoyed lockdown. I’ve loved guilt-free days of watching back-to-back episodes of 90 Day Fiancé and The Real Housewives of everywhere in the world. Having said that, I can’t think of anything worse than being locked down with any more people. My husband and I were fine, now Louis’ home. He steals my Air Pods, my clothes, my perfume actually, Lincoln’s aftershave, to go where? Nowhere! For a walk in the park with his friends. Couldn’t cope with another person, even my other son.

The naughtiest thing I’ve done in lockdown? (Ponders). I’ve been quite good. Probably not go for walks when you were allowed to go for them. And to most people, it was the salvation. And then when they said that you could go for as many walks as you like, go for even less.

What bad habits have you picked up?

Occasionally missing a day of showering, and sometimes not flossing. Which is ridiculous because there’s more time than ever to floss, been a bit lax on it.

And in terms of habits you’ve picked up that you’ll keep doing?

What will I do? What will I keep on doing? I’ll relax more and not feel guilty about it. I will cook more because I’ve enjoyed it. I will read more and I won’t race around so much. Volunteering, not physically going out and volunteering, but I have done probably every day something to help a charity online virtually. And I’ve spent many enjoyable hours talking to staff at the hospice that I’m a patron of and making videos for vulnerable people. So I feel like I’ve done my bit.

What music takes your mind off the crisis?

Frank Sinatra and Dionne Warwick. I’m very old in that respect, in my music. But I love some of the 1975’s new album.

What’s the first silly thing you’ll do once lockdown is lifted?

To be perfectly honest, if the restrictions were lifted today, I would do exactly what I’m doing. Which is going to stay in and possibly have a takeaway because I’ve been to work today. So not much would change. But what I think I’ll do… if they said everything is completely going back to normal tomorrow, I would book a ticket to somewhere abroad I’ve never been before. Whilst having my friend Karrie around to do my nails and my feet because my feet, my toenails are pretty disgusting. Thank you!

Denise’s book The Unwelcome Visitor….Depression and how I Survive It is out on June 25th 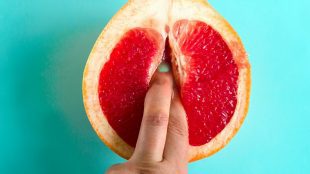 How to have the best orgasm. And how things change as we age…