Right, buckle up because we’re about to blow the lid off the sexy secrets of the over 55s!

A survey which peeks into the UK’s bedroom secrets has debunked the myth that people over 55 would rather have a cup of tea. In fact far from it; the survey by Mr & Mrs Toy, makers of the award-winning sex toy the O-Wand, showed those born in the swinging sixties – and beyond – are fully feeling frisky.

The independent survey of over 2,000 men and women revealed some enlightening answers from in the over 55s category:

So what conclusions can we draw from this? (THREE VIBRATORS?!)?

Well, it seems that the over 55s are certainly not slowing down when it comes to a bit of self love; it seems you can keep your dinners, your gyms and your meditation – there’s nothing like a bit of sexual release for relaxing. Nor are they shy when it comes to trying sex toys – and in fact are more on par with the very young group in the survey. This probably raises the question about having enough time for simple pleasures.

Time is short in our middle years, bringing up kids and working all hours, and sex often goes on the back burner. But as we find ourselves with more time, er, on our hands, it seems that sex drive rises right back up again. Good news for anyone in their 40s despairing that their sex life has dwindled to nothing but a fond memory.

The survey also suggested the older generation are more honest in their relationships than younger respondents. Almost 80% said they are unlikely to hide anything from a partner, for instance, compared to just 50% in the 25-34 age group. However, they do take longer to introduce sex toys into the bedroom, waiting an average of nine months into a relationship to whip them out, compared to six months for the younger groups.

Goodall said, “It’s up to couples to choose when is the right time to spice things up in the bedroom and to decide which sex toy suits them best – and that’s natural. Make sure your toy is made with body safe material, is fit for purpose and tickles your fancy every time!”

So it’s definitely not all doom and gloom when it comes to thinking about your sex life in later years – quite the opposite in fact. Apart from the honesty aspect within older relationships, the level of self love indicated in the 55+ age group perhaps doubly demonstrates that confidence and sexual appetite grows in our second life. And if we’re not already romping about, that’s something we can all look forward to, eh.

We felt it was our business to try out some of Mr & Mrs Toy’s toys, and so we’ve committed some serious time and journalistic research, er, studying the O-Wand (pictured), and can report that it’s safe, made from medical grade silicon (there’s a difference) and is waterproof, making bathtimes even more fun. And it’s fun! For more information please visit www.mrandmrstoy.com or www.o-wand.com

Meanwhile, as we’re generally very nosy here at Silver, we’d love to know – is your sex life (on your own or with others!) better post 50?! 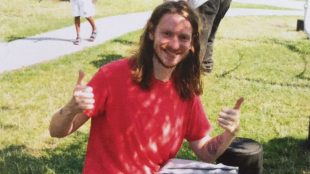 How do you cope with your son’s suicide?