If you’d told me a few years ago that people would be stockpiling foods in preparation for our exit from the EU I’d have looked at you like you were mad. It’s not the 40s! We have free trade, the ability to buy food from every corner of the world don’t we? What nonsense is this!?

Well apparently no, we might not be able to buy food from every corner of the world any more – at least not as smoothly – and yes, this is actually happening. People are stockpiling left, right and centrist.

I’m definitely one of those people who have scoffed at the suggestion of stockpiling (if you’re not one of those, there’s a bit of list of suggestions and links at the end of this piece). There’s a sense of incredulity that goes with even considering it as a course of action. In fact I hadn’t actually even given it any proper thought at all until my friend Katy posted on Facebook ‘So, er, what are we all doing about stockpiling?’. 173 comments later (and counting) it seems that people are doing a lot. I began to take notice.

Last Monday (28 January) a group of the biggest supermarkets – and some other food service giants – wrote to the Government basically telling them there seemed likely to be food shortages in the event of a No Deal Brexit. The bleak warning identified that leaving the EU without a deal could cause “significant disruption”. Read the full text here.

The joint letter was signed by – amongst others – Lidl, Sainsbury’s, Marks & Spencer’s, Co-op, Waitrose and Morrison’s. So incidentally those of you imagining that your European foods might just still appear via Lidl or Aldi, think again, more on that later. But it’s not just supermarkets. Pret, KFC, McDonald’s and Starbucks all signed too. So this is a definite Thing.

WHY IS A FOOD SHORTAGE A POSSIBILITY?

There could be delays importing food

Well firstly, it’s not just food. It’s stuff like cars, and medicines too, although I understand this latter issue to be ‘in hand’ by health secretary Matt Hancock, who claimed last August that the government had been working to ensure an additional buffer zone of supplies.

If we leave without a deal, the immediate situation seems fairly predictable – we will simply revert to World Trade Organization (WTO) settings by default until new arrangements are put in place

So six months ago, the government were already instructing clinicians and prescribers to brace themselves and get stocked up. Has this happened? I’m not sure. A call to my local surgery reveals that apparently no patients are asking for longer term prescriptions; the pharmacy attached to the surgery refused to comment.

But to go back to the question about food shortages, the issue is around border control. Isn’t it always? If we leave without a deal, the immediate situation seems fairly predictable – we will simply revert to World Trade Organization (WTO) settings by default until new arrangements are put in place. Which is reasonably clear cut – have a look at the WTO rules here – but does definitely indicate that the smart money is on increased border checks on food, going both in and out of the UK, leading to delays, food ending up on shelves with much shorter lives or not at all, yada yada.

Our exports and imports could/will be subject to duty, so lots of checking there, and it seems there will be more checks on aspects like sanitary compliance. And it’s not just the moving of food around. Legislation around things like fishing rights and air traffic will all change pretty much overnight too – enough for the government to be expected to call on a ‘critical condition’ mode on the night before Brexit.

The MoD has some 3,500 personnel lined up to deal with the trouble they believe it might cause, and Kent Police have come up with Operation Brock – a plan for closing some motorways and parking up to 13,000 trucks – in order to ease jams and delays on the roads to and from the Continent. It feels pretty surreal.

WHY CAN’T THE SUPERMARKETS JUST SORT THIS OUT?

Supermarkets don’t have huge warehousing resources. They tend to keep those to a bare minimum and operate a kind of ‘just in time’ system around fresh produce

You might ask why, if they believe that their supply chain is under threat, supermarkets and food suppliers don’t just do the stockpiling for us. After all, it’s not just us UK consumers who will be affected – the EU suppliers will too. Their sales will drop until a solution can be found and the supply chain is speeded up again. Farmers on the continent can’t afford to have lorries full of lettuce deteriorating for days on end stuck in Calais or Kent.

But supermarkets don’t have huge warehousing resources. They tend to keep those to a bare minimum (because costs, obvs) and operate a kind of ‘just in time’ system around fresh produce.

Mediterranean foods could be hit by delays

Around a third of the UK’s food comes from outside the UK – and it’s bad news for salad lovers. 90% of lettuces and 80% of tomatoes come from the EU, for example. Friends responding to Katy’s post on Facebook seem to mostly be concerned about getting meds, stuff like insulin, for example. And Mediterranean foods like olive oil, tinned tomatoes and so on. Everyone seems largely resigned to the price of food going up. Regardless of whether or not a Deal happens, it seems likely that after 29 March it’s going to be bumpy for a bit.

IS THERE ANYTHING POSITIVE TO TAKE FROM THIS?

I voted to remain, personally, so it’s hard to feel terribly positive about any of this, but in the interests of fair play, I asked some Brexity chums. Julie Burchill, staunch and vocal as ever, says, “I’m more sure with every day that passes that I voted the right way, seeing the disgusting bullying behaviour of Brussels and the coming recession which will engulf the Eurozone.”

On balance, this can be likened to the biggest game of poker played out, certainly in my own experience

And moving into WTO settings isn’t something that worries Matt Wright; “If we do transition to WTO, then the EU will then HAVE to return and renegotiate with the UK, they won’t have the leverage, or the perceived leverage, they have been allowed to exercise up until now by a too-eager-to-please-and-appease Theresa May.”

On balance, this can be likened to the biggest game of poker played out, certainly in my own experience, and even as I write I honestly don’t fully understand the standpoints (of this, or poker, to be honest). In simple terms, Leavers argue that because the UK operates at a trade deficit, ie, we buy more than we sell, we are seen as a valued customer to the other countries and they’ll all want to keep selling to us. Nice if we can sell to them too, but really what’s on the table here is our shopping list from around 27 other countries.

Interestingly though, our services trade (as opposed to commodities) rocks the other way; we sell more services than buy. Which I guess puts us at a disadvantage. But then there’s the money we pay into the EU – a pretty whopping amount… so really, it’s about who is gonna raise before the flop and see the other’s hand.

Whether or not a recession in the Eurozone is coming seems uncertain. Portugal and Spain are firmly in the ascendant, just as Italy and Germany are sliding down. In comparison, the UK’s economy is doing ‘OK’, but the No Deal threat is making everyone’s bums a bit twitchy, and as with so many aspects, what will happen to our economy is really only going to become clear after the 29 March.

Well – probably to stockpile a bit, although it really depends what you buy and where from. If you’re someone who gets a food box each week from Abel & Cole and you’re already eating British produce from small farms and grow a bit yourself, you’re probably not going to notice much except maybe a price hike as demand outstrips supply.

If you live in the middle of nowhere, you’re probably going to struggle. Getting fresh salad delivered to the outposts seems a tough call.

But if like most people you chuck half a supermarket into a trolley once a week and top up with fresh stuff as you go along, you actually might want to plan a bit.

In a recent piece in the i, they found a chap called Andrew Rawson, who lives in a rural area in the north of England. Andrew has been regularly storing food and household items since his village was hit by a snowstorm a few years ago when some of the roads were inaccessible and he was able to identify what the local shop ran out of fastest. He’s now an official Brexit ‘prepper’ and has even written a book about it. You can find him Tweeting here.

For those for whom economical shopping for healthy food is a ninja skill honed from necessity by poverty, Jack Monroe has created a helpful list of stockpilaeable foods and their related vitamins, so you can meet your RDAs and stockpile frugally.

Overall I think the short answer is that if you’ve got a bit of space (or can share space with others) you could do worse than lay in some backup food until we know where we are.

WHAT TO LAY IN AND HOW TO STOCKPILE

Realistically it’s not something to panic over. I’m not sure that phrases in the media like ‘crashing out of the EU with no deal’ really do much except make people anxious, and really and truly NOBODY knows what is going to happen. But a bit of a backup plan is always handy, I find. 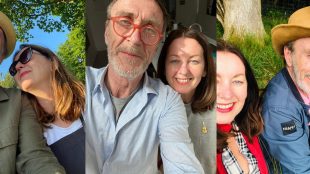