About four or five years ago, I sat in a meeting room with my team and pitched what I thought was a Great Idea.

For those of you who don’t know me, I have a Great Idea probably twice a day. Some are Greater than others. Most of the team raised a quiet eyebrow but listened politely.

We were a fairly new business at the time, a small publishing house with a marketing agency side. At the time I was about 47, 48. And as someone interested in magazines, I’d started to look around at magazines specifically targeted at the 50+ age group.

Honestly, at the time, it was pretty dismal.

Things are improved now, but the obvious magazine for the ‘mature market’ was quite grim. And I looked at some of the other newsstand giants and was left cold by those too. As far as I could see, the content in the magazines bore very little relevance to my own life. And ‘bore’ was the operative word all round.

Not all over-50s are built the same

I was born in 1970 and grew up through a time of massive social change. I was formed during the rise of feminism, a child through the lingering permissiveness of the 60s. Men had landed on the moon. People turned on, tuned in, and dropped out. Punk came and went, as did the beautifully garish 80s and my floppy New Romantic fringe. We had Thatcher. Riots. Football violence. Then the Summer of Love, and the sensory tsunami that was dance music and ecstasy blew my world open.

Through all this I grew and absorbed. I was working in magazines when nascent emails and the world wide web started to take hold. The world was opening up before my very eyes, literally. I grabbed every opportunity that life sent my way and I have – so far – had an extraordinary time. And I’m not even close to being finished with it.

So I looked at these magazines, and I looked at me and my friends, and I realised there was a big old gap. As the kids say, WTF?

So my Great Idea was to have a magazine for my age group that actually reflected our lives.

One of the younger members of my team looked horrified. He was about 24 at the time. “I’m not writing stuff for old people,” he said, aghast. And in that moment I knew this was why we had to make Silver.

It was bloody well time to change perceptions – there are more adults over 45 in the UK than any other age group. We run the world, have the most money, live increasingly longer lives, and have backgrounds rich in experience and wisdom. And yet we’re looked at disparagingly.

I’m not an idiot. I know that young is fun, and it’s excellent to be sexy and attractive. But so much of that side does the heavy lifting. Being young is also really crap. My mental health was shot to bits, I was insecure, unstable, often angry, often broke. My knees might be a bit crunchy now but I am so, so much happier these days.

So it became a bit of a personal crusade, to create a magazine and platform where older people could find themselves, and find they’re still cool. A place to celebrate. But also a place without judgement.

Since I started to shout about this, lots of other people have started to step forward, and I have seen perceptions change massively in the last few years.

Silver Magazine in print has been put back a number of times, for different reasons. Some have been my own personal tragedies. Some more obvious, like Covid. But we steadily built an amazing, engaged, and very lovely audience via our website, and especially Facebook, and this week saw my dream realised. 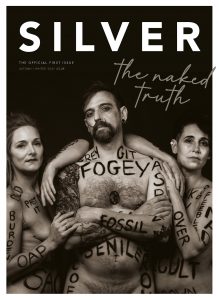 Silver Magazine is finally in print. It has been a long time coming, and I am both grateful and astonished at how patient people have been, and how amazing my team have been. But it’s here, and I’m very happy with it. I hope you enjoy it too. 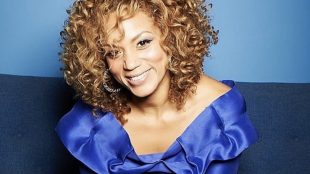