What do you know about the Pearly Kings and Queens? They’re one of the most iconic of London’s sub-cultures. We spoke exclusively to some Pearlies about the reality of being one of British history’s coolest communities.

Also known as Pearlies, the Pearly Kings and Queens are actually a charitable organisation, traditionally embodying working class culture in London. They freely give their time to fundraising for nominated charities, in order to support people in need and provide a better way of living. Due to their colourful working class roots, Cockney Rhyming Slang is very much a part of the Pearly tradition, and further personifies the London character. 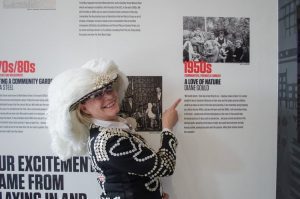 “Pearlies have always been collectors for charity,” explains Diane. “And we showcase our tradition in a positive light through talks and singalongs. My whole time is in keeping the Pearly tradition vibrant through educational talks to groups of all ages and helping charities whenever I can to raise fun and funds.”

You need to be part of the family to be a Pearlie. Diane explained how Pearly titles pass down through generations in London. And while some Pearlies have now moved away, they still hold their original London titles. 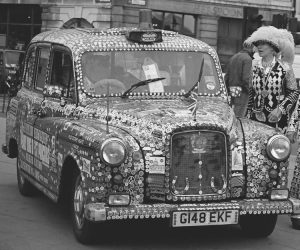 Going back to their roots, Henry Croft, born in 1861 London, was raised in a workhouse orphanage in St Pancras. After leaving the orphanage at the age of 13, Croft became a street sweeper and rat catcher, and the costermongers (street traders) soon caught his eye with their jazzy outfits, which were usually trousers that had been decorated with pearl buttons found by market traders.

Croft used this to fashion himself a pearly suit in the late 1870s, which brought attention to him and his fundraising. The first organised Pearly society was established in 1911 in Finchley, North London.

At Croft’s funeral in 1930, over 400 people attended, and there was national media coverage of the event. His name was a memorable one, and his death was a sad occasion for everyone in London and many people in the country.

Pearly titles pass down through generations in London

A speech that accompanied a 1934 memorial of ‘The Original Pearly King’ stated that he had raised over £5000 for people suffering in London hospitals. Thus, a tradition was born.

Today, there are Pearlies of all ages in London. They start from new born babies who have titles of Prince and Princesses, whose births are accompanied by a Pearly christening. The eldest Pearly is 93-years-old and still putting on her regalia. 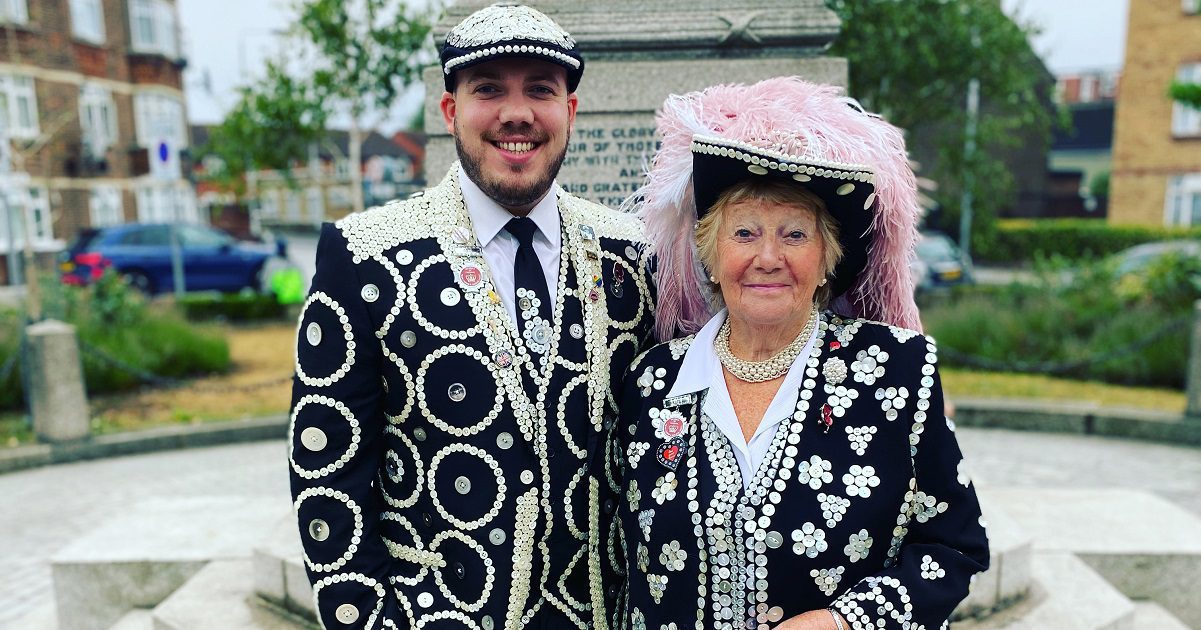 “I was born into the Pearly tradition,” says Jack, “and have had my titles passed down through the family. We have over a century’s worth of history within the Pearlies, and we also hold one of the original titles of Stonebridge Park.

“I was actually in the local newspaper when I was a baby for being the youngest Pearly King. Usually, you would be born as a Prince or Princess, but my Great-Grandad had sadly passed away, so I automatically took over his King title.”

“I was actually in the local newspaper when I was a baby for being the youngest Pearly King. Usually, you would be born as a Prince or Princess”

Not just anybody can become a Pearly King or Queen. Jack explained how, to become an original Pearly, you have to be born or married into it.

“It is a family tradition and is passed through the generations. However, we do allow people to be Prides of the association. A Pride is either a close family friend, or friend of the Association that shows interest. A Pearly Pride will take the King or Queen’s title that brought them into the association and eventually, if we have titles that aren’t being used, we can loan them a title to become a King or Queen.”

Wendy was asked by Jack to be his Pearly Pride as she was so interested in the Pearlies that she already had her own suit. After months of commitment to the association, Jack’s family loaned her the title of Pearly Queen of the Borough, which had been an idle title in his family. She’s thrilled.

“I was honoured to have been asked, and I am so proud now to have the loan of the Queen title,” beams Wendy.

What are the responsibilities?

Jack told us how their main focus is charity work.

“Everything we do and any money we raise is distributed to charities of the association’s choice. We are a registered charity ourselves, but all collections and money donated directly to us is passed straight to local charities.

“We all represent our boroughs, so any events within that borough we get invited to. We also hold our own charity events to raise money. We take most jobs that we are asked to do, as we like to raise awareness when we can.

“There’s a whole variety of events, from visiting hospices and care homes, to the opening ceremony of the London Olympics. My favourite event that sticks in my mind is the Queen’s Jubilee. You’ll often find us at local pubs doing a knees up or at street parties around the place.

“In essence, we do anything and everything London.”

This sentiment was echoed by Wendy.

“The Pearlies are great fundraisers and we help support many local charities. Some Pearlies have even taken part in events such as the London Landmarks Half Marathon, while some have fun the rest of us are at the finish line handing out the medals. We are unique to London, which makes us special, and people love to see us at events. Particularly the older generation, who love the nostalgia.

“My proudest moment so far was having the honour to lay the wreath at Leytonstone war memorial for VJ Day; this was close to my heart as my Dad worked on the Burma Railway and sadly did not come home.” 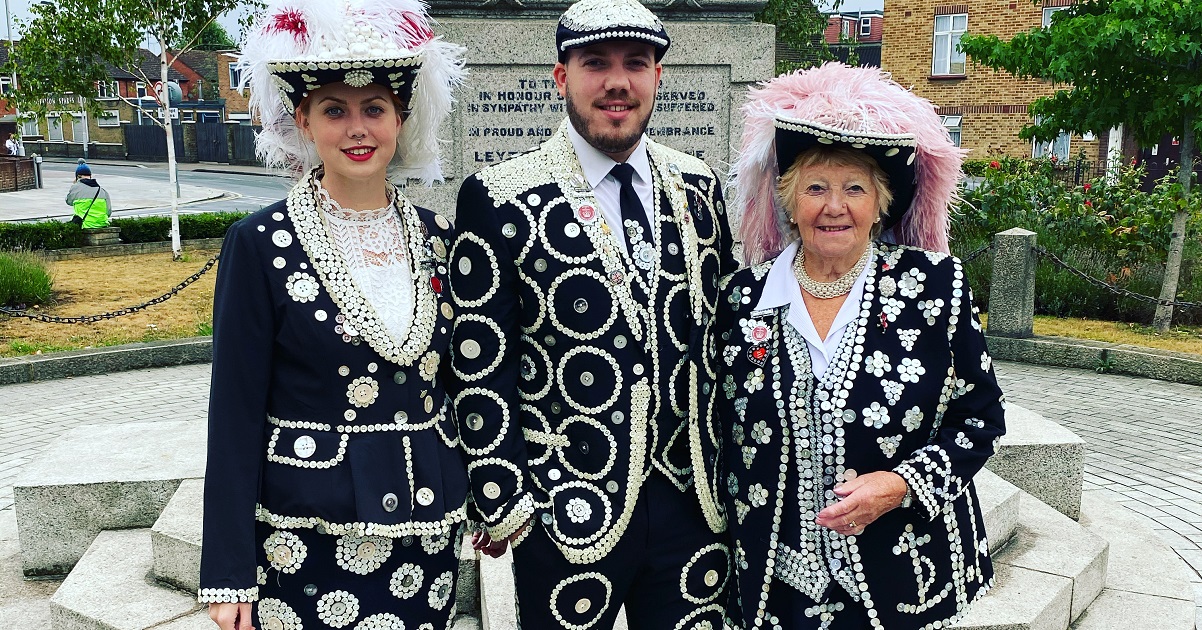 “We all try to give as much as we can around our day-to-day work life and commitments,” says Jack. We have our largest event in October every year which is our annual Harvest Festival on the first Sunday of the month. This is where you will see the largest gathering of Pearlies, as we all try to come together for that. Unfortunately due to Covid, the Harvest Festival cannot go ahead this year which would have been its 145th year. This just means our 150th anniversary will be a big one!

“Most of us have full-time jobs, and do our Pearly duties when we can, or when there are events to attend. A normal day, for example on the day of the Harvest Festival, sees everybody waking up and having a cuppa Rosy Lee before making sure our suits are in the best condition. We sew all of our buttons by hand, and make all of our hats ourselves. We’d then head into the event in full regalia, leaving an hour in advance to prepared for the many photos we get asked for. You can guarantee that, at some point, ‘Knees Up Mother Brown’ or ‘Doing the Lambeth Walk (OI)’ is being sung!”

Still working in the pandemic

Despite Covid-19 and the lack of events thus far this year, Wendy explained how the Pearlies are still giving their time to their society.

We sew all of our buttons by hand, and make all of our hats ourselves

“Unfortunately because of lockdown, we haven’t been able to get out much, so I have been putting the time to good use by sewing on lots more buttons. It takes time and dedication to do this, and as you can imagine, the more buttons there is, the heavier the suit becomes.”

Are the Pearlies dying out, or are they becoming more popular?

“It has started to die out for a couple of different reasons. Mainly, it’s because the older Pearlies have now passed away and either have no family, or their family do not wish to carry it on.

“Luckily though, we have the Pearly Prides to be able to keep this amazing tradition alive, and there’s also a passion and drive from the younger generation to keep it going.

“People are always surprised when they attend Pearly events when they see how many younger Pearlies there actually are. With today’s lifestyle, where everything is done on social media, it allows us to put ourselves out there. I look after the social media accounts of the association and try to keep it fresh and up to date.

“Last year, we attended Brighton Pride for the first time ever, and we were taken aback to see how many people recognised who us Pearlier were.”

What’s the best bit about being a Pearly?

Both Jack and Wendy’s favourite part of being a Pearly is the pride that comes with wearing those pearls. Jack said:

“For me personally, it’s the pride of being a Pearly. I love nothing more than when I put on my suit. I feel that I am carrying my Nan’s legacy and that she is with me each time. I love the family feel when all the Pearlies are together, and I love doing my bit for the community and its local charities.”

When I put my buttons on, I’m proud to be part of the fabric, and of dear old London Town

“I love being part of a happy and historical family. My favourite thing to do is sing and dance, and it’s great when all of us are together and we can have a good ol’ knees up.

“I also love the social side of it and getting to meet new people. When I put my buttons on, I’m proud to be part of the fabric, and of dear old London Town.”

Jack and Wendy both felt it was important to spread the passion and happiness that comes with the Pearly community, and they want you to know about it, too.

“We are still here and working hard to keep our heritage and beautiful tradition alive. We do everything out of pride and love, and it’s a tradition that needs to stay alive, as it is part of London’s history.”

How can you be a part of the community?

While we can’t become Pearly Kings or Queens ourselves, there are a number of ways that we can help out and join in with the association.

You can follow them on social media to keep updated on what they’re doing or contact them for more information.