Do you line up the next lover before you leave? Have someone waiting in the wings? Julie Burchill asks; Why would anyone get out of the bath until they’ve turned the heating on?

‘Overlap’. It’s not an attractive word, with intimations of too many teeth spoiling a smile or shoddily-lain linoleum. It’s certainly not a word that one would associate with such a fragrant presence as that of Felicity Kendal, the nation’s superannuated sweetheart.

Yet in an interview with the Sunday Times earlier this year, the demure thespian – 72 and still sexy – spoke thus of her long and interesting romantic record: ‘I didn’t have affairs – I just went from one to the next, with a bit of overlapping.’

Maybe I’m a touch touchy about this because my laughably-named ‘private life’ has been one long Overlap. I’ve probably slept with far fewer people than most women of 60 (especially considering I’ve spent forty-three years in the world of journalism, a milieu so sexually generous before the daytime drinking ban that we made your average Aerosmith tour look like a Women’s Institute AGM), but that’s because I got married as a teenager to the first man I had sex with.

I’ve hardly been some sort of bed-hopping fly-by-night. But nevertheless I have persistently Overlapped

My first marriage lasted five years, my second ten and I’ve been with my third husband for almost a quarter of a century so I’ve hardly been some sort of bed-hopping fly-by-night. But nevertheless I have persistently Overlapped my suitors, at one point uttering the unspeakably vulgar line ‘Why would anyone get out of the bath until they’ve turned the heating on?’

Having left my first husband for my second when I was 24, then my second husband for a girl when I was 35, then that girl for her own younger brother six months later – Overlapping all the way – I feel I’ve certainly packed in enough romantic permutations to last me a lifetime.

The first Overlap was a cloak-and-dagger affair during which I took the train to London from my suburban bungalow once a week to my lover’s flat in Chelsea. My husband, a traditional man, would not have appreciated this one bit and so I fled before we were detected.

My second husband was worldly enough to *allow* me to have a love affair with a girl but not worldly enough to understand that love laughs at allowances. My love affair with a girl imploded under the pressure of too much oestrogen and the unsettling presence of her younger brother – now my third husband – who made me realise quite quickly that just because one enjoys a holiday on Lesbos, one doesn’t necessarily want to move there for life.

It’s a widespread phenomenon; at the other end of the celebrity spectrum from the semi-sainted Kendall we have Katie Price, who has stated that when she feels a relationship is coming to an end she ‘always has a new man on the back burner’. I’ve lost count of the number of times I’ve read unsolicited advice from insolent agony aunts advising her to ‘take time for yourself’ because ‘jumping straight into a new relationship is never the answer.’

But you just can’t win with these professional sticky-beaks; should a famous female go for ‘too long’ without male companionship and she’ll find herself splashed over the celebrity magazines as ‘a recluse’ who has ‘given up on men’. Personally, I believe that those who advise us to leave a gap between courses are probably just *hangry*, and want us all to suffer with them. Like those friends who declare they aren’t eating carbs and then stare resentfully at your cheesy chips till they’re gone.

Overlapping has always been common among women with the wherewithal not to need society’s approval; look at Liz Taylor, who Overlapped so much she ended up lapping herself and reuniting with Richard Burton, or indeed Kendal herself, whose current ‘boyfriend’ is the husband she left for Tom Stoppard more than two decades ago.

I asked around amongst my friends for examples of Overlapping. L remembers: ‘When I was young, I Overlapped with three brothers – one of them knew about all of them, another knew about one, the other knew about nothing. In fact, I Overlapped to the extent that I recall one going out of the basement flat door while another was walking up the stoop to the main front door.’

Why do Overlappers irk people? It can’t be sexual morality, as we often have less sex partners than other types, who may well fit in interludes of frantic promiscuity between real relationships. There may be a sort of overly-fastidious morality at play which sees Overlapping as a prolonged version of ‘double-parking’ – having sex with two people in the same day – which shamelessly contradicts the idea of woman as some sort of chaste vessel with only one careful owner.

It indicates that a woman can have her cake, eat it and then order a muffin too, which contradicts the boring old lie about men being polygamous and women monogamous – which only ever existed because for most of history women haven’t been able to pay their own way in life and depended upon the *protection* (a nice way of saying the ownership) of men.

But of course it’s not just women who Overlap. D says ‘I left my wife for another woman, had a change of heart and went back with her for one Overlapping night before deciding the initial decision was the right one and resuming the other Overlap – only to discover six weeks later that my by then ex-wife was pregnant with my eldest son.’

P confesses ‘I dated three Sarahs at once – mayhem! I’d come back from lunch and there would be a note on my desk – ‘Sarah phoned – please call her back.’’ J can literally go one better: ‘When I was at university four different girls I was Overlapping with asked me which train I was getting back from my hometown after Christmas. Only after telling the fourth did I realise it might be embarrassing – so I bravely caught an earlier one.’

Though I am endlessly delighted by my own company, I don’t care to have it imposed upon me, but rather to choose it when I please.

I don’t feel in the least regretful about my serial Overlapping, and I’m not sorry that I failed to do the agony-aunt-approved penance in the slough of solitude. Though I am endlessly delighted by my own company, I don’t care to have it imposed upon me, but rather to choose it when I please.

I love being in relationships and I’m good at it, being both amusing and affectionate. I love having a partner-in-crime and a not-quite-captive audience. I like having sex on tap; I’ve never been to a singles bar, not even when I was a hot young thing, and the idea of resorting to such a random raffle so late in life and being a swinging sexagenarian feels me with equal parts amusement and amazement.

Though seeming to be a particularly duplicitous brand of promiscuity, I believe that Overlapping can actually stem from an over-romantic desire to find the mythical One – what the Cathy & Claire problem pages of my girlhood used to call ‘frantically seeking happiness from bed to bed’. And if there is any reason to condemn it, this is the one I’d choose. Because one thing it’s never too soon to learn about relationships is that no matter how often you bolt or how far you run, you inevitably take yourself with you.

Forget finding The One who’s going to make everything perfect; as long as you’re dissatisfied with The One in the mirror, you’ll be dissatisfied with your primary romantic relationship. And no lover, Overlapping or not, can ever fix this. 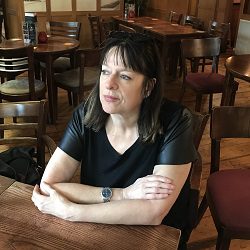 Julie Burchill has been a published writer since the age of 17 – she is now 60. Her hobbies include spite, luncheon, philanthropy and learning Modern Hebrew. Her musical Hard Times On Easy Street will premiere in Brighton in 2020.

Julie Burchill has been a published writer since the age of 17 - she is now 60. Her hobbies include spite, luncheon, philanthropy and learning Modern Hebrew. Her musical Hard Times On Easy Street will premiere in Brighton in 2020.