Instagram and blogging is often seen as women’s territory but a growing army of awesome men are proving that wrong.

Instagram is home to literally thousands of men over 50 ‘living their best lives’. And yes, we hate that expression too, but it kind of fits. Finding themselves modelling in their 50s and 60s, these guys are coming from a number of different places – whether it’s about the beard, the fitness, the tattoos or the lifestyle – or all of the above. We took some time to find out a bit more about what makes some of them tick, and what they do when the cameras are off…

@dumphil
Philippe Dumas is 63 and lives in Paris. He worked for 25 years as a unit manager in the movie business before starting modeling three years ago. Loves animals and has a Scottish fold cat named Arsene, whom you can see plenty of on his IG feed, lots of tails and paws! Amazingly he’s single. “I love sports and take ballet classes. Age is just a number. Youth is in your head,” he says.

@silver_and_strong
Dane Findley is 53 and is all about health and wellness. He runs a fitness training site, and his attitude towards life is a huge part of what he does. “The motto I live my life by is ‘Move toward joy’,” he explains. “I feel quite strongly about that, actually.” Check out his website – lots of free fitness tips!

@njp147
Nick Pearce is 51 and lives in Cheltenham UK. He was a model in his early 20s after winning a national model competition, then became a professional snooker player for 15 years, playing on BBC and Sky Sports. “In my 40s I became a father of three, and before turning 50 was asked to model again; now I’m signed to agencies in London, Paris and Hamburg and have also acted this year in two major British TV shows,” he says. “Also I work as a teaching assistant in a special needs school since 2010.”
His life motto? “Family comes first, then life can be enjoyed.”

@threalalessandromanfredini
Alessandro Manfredini is first and foremost a sculptor, and is also a graphic designer. “In the past five years fashion has come into my life,” he says, “and for fun I enjoy playing the model!” What motto does he live his life by? “Amici a tavola e un buon Lambrusco! Friends at the table and a good Lambrusco.”

A post shared by Alessandro Manfredini (@therealalessandromanfredini) on Jul 23, 2018 at 12:49am PDT

@berzinsky
Greg Berzinsky originally hails from Pennsylvania with a European and Russian heritage. Growing up he was the tall skinny kid who didn’t fit in, but as he’s grown into his own skin and self, he’s taking the world by storm. He’s one of the good guys and his faith is strong. His motto? “You are not your own boss. Work is unto the Lord. Keep on growing.”

Fall Ahead –the chill this morning has me thinking all things Autumn. #tbt 1📷@philatawgrapher @rideandsons Jacket

@martin_kuhlmann
Half Greek and half German, vegetarian Martin lives in Berlin but spends plenty of time in Greece (Athens & Thessaloniki). He’s a big snowboarder and loves tennis, yoga, jogging – and chess! He doesn’t drink or smoke but his secret weakness is chocolate. “I’m always trying to develop myself as a person and my motto in life is to be good to yourself, to all human and living beings, and appreciate the environment.”

@fcipriano
Francisco Cipriano models literally all over the world and loves what he does, but is now also working on new projects close to his heart and his love of Portugal. “Life is not about finding yourself. Life is about reinventing yourself,” he says. And proves it, as guide and narrator for a documentary called Movement. The film aims to provide the viewer with an awe-inspiring insight into the lives of not so ordinary people, traveling around Portugal’s countryside and coast in a captivating way. Read about it here.

A single picture can tell you lots of stories. But this one is kind of special. Last session from this year summer break. 20 days of surf, sun, ocean, sunset & early mornings, fresh bread, family and friendship. Its good to slow down a bit. It’s amazing to be in a place where I’m all the time but where I still have so much to discover. The world come together in this place. Thanks Richard de Wit and @ilsankerphoto for the afternoon gin&tonic, even if the dinner was just an omelette. The waves were amazing that morning. @danishwoodsm for sharing your amazing van to the word! Perfection I must say. You guys Alessandro Bigotti @alessia_gio77 and Eric Rico Cerlo for the company in the rocks! To you @vagabondnotes for been the first one to have it in your camera forever. Thanks! It’s your turn now. Trust me! @diana85sa forget about Berlengas … It’s just a rock! … @alijohnwatts for the big effort in that grey wet morning…. @jorgeduarte2427 and @tt_duarte42 let’s do more next year. And you my friend @liquidph2oto for the captures in your camera. … also this one! To the other Alessandro @explorationsofhumanity … we miss you. We have you in our hearts in each wave we surf! Come back soon. |EVERYBODY NEEDS A PLACE IN THE SUN | #atlanticocean #portugal #surfingdays #thetrickytraveler #everybodyneedsaplaceinthesun #baleal #peniche #surfingdays #thebestplacetobe#surfinginportugal #finallyinholidays #vanlife #excelwetsuits @livestoked magic board !

@manos_pintzis
Manos is 48 years and lives Athens, Greece. He’s a family man, with two kids, and for 20 years has been an actor, graduating into modelling in more recent years. “I love jazz, I travel, love movies and the theatre. I’m a lover of classical things,” he says. “My motto? ‘It’s never too late for a big change.’”

@anthony.varrecchia
Anthony is a native New Yorker who began a career as a personal trainer after working in publishing for 30 years, inspired by working for several fitness publications. Fitness is still his big thing. “It’s a priority in my life. Modelling entered into my life after a few agencies reached out to photograph me because of the silver hair and beard. I am now represented by modelling agencies showcasing my category as a fit older “silverfox” model. My Instagram is used in a positive way. To inspire, be creative.”

I call this my Homage to the glamorous @amandalepore. This tank was for my Amanda Lepore workout! I wore it and wore it! Then…😞.. I lost it. But I still have this photo shot by @kdhphotography #avsilverwear #anthonyvarrecchia #gaypride #fitover50 #beardedmen #muscle #becreative #amandalepore 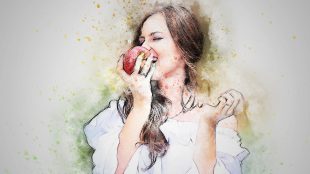