Think that Instagram influencers are all twenty- and thirty-somethings? Think again…

Instagram’s allure is drawing the over-50s in their droves. Just two years ago, those aged 50 and over accounted for 8% of the platform’s users; now, the number stands at 14% – and is anticipated to keep growing at a steady rate.

It may not sound like much but, take into consideration the photo-based social outlet boasts 1 billion active users each month, and this equates to a massive 140 million individuals, many of whom are influencers. So how do you get to be a mature influencer?

Influencers post curated images to offer guidance and insights around a particular subject, and often partner with companies to encourage brand awareness. It’s big business, too: the influencer marketing industry is predicted to be worth $15 billion by 2022, with the average influencer able to charge $10 (£7.60), per 1000 followers, for a sponsored post.

For many influencers aged over 50, it’s more than just an avenue through which to generate extra income. ‘I don’t see myself as an influencer…I do it for the community of people that have gathered there,’ reveals 53-year-old Nikki Garnett (@midlifechic), who shares her Lake District life with 24,000 followers. ‘It [her Instagram and blog] never has, and never will have, making money as an objective.’

‘By far the largest age group following me is those aged 25-34; only a tiny percentage are my age,’ explains 65-year-old Londoner, David Evans (@greyfoxblog), who has accumulated over 30,000 followers since December 2011. ‘They may like a classic style of dressing, or simply seeing Harry, my Labrador Retriever, I don’t know. But it suggests that the age of an Instagrammer is not a significant factor.’

This is a sentiment echoed by Evans’ peers. ‘I feel like it’s because I’m over 50 that I get the traction I do, and not in spite of it,’ states 53-year-old New Yorker Angelique Miles (@angeliquemiles), who has accrued almost 50,000 followers since 2014. With a predominant focus on fitness, there’s no denying Miles has an enviable figure – for any age – and says her profile draws in younger people, ‘who tell me, “If I can look like this at 53, then I’m going to follow you!”’

Meanwhile, Houston-based Irvin Randle (@irvinrandle) believes a lack of understanding around the reality of older generations is piquing the interest of younger users. Aged 58, he boasts 349,000 followers. ‘Millennials and Generation Z don’t know too much of the process of ageing, how to age gracefully. I’m showing that, at this age, I can wear anything I want by keeping it grown and sexy [with] different elements of style.’

Another aspect that’s undoubtedly drawing followers to older influencers is a sense of genuineness. Whereas many in their teens, 20s, and even 30s happily spend hours changing outfits to pose for different photos in various locations, this prospect holds notably less appeal for their more mature cohorts. They tend to post on a more spontaneous basis. As such, authenticity shines through – an aspect 86% of Instagram users attach the most importance to when scrolling through images.

‘I try to be as authentic as possible. If I don’t have something to say, I don’t post,’ states Miles. ‘The brands I usually work with are skincare and beauty, so I do curate content for that. But for general content, I don’t really curate anything. It’s not a case of, “Oh, that’s some good light, let me take a photo”.’

I try to be as authentic as possible. If I don’t have something to say, I don’t post

Evans concurs. ‘My posts are a bit rough at the edges, as I do not have a professional photographer or the highest video and image editing skills,’ he says, while Garnett shares that her followers resonate with the fact her images are ‘real’.

‘I don’t have a planned schedule, I simply post when I feel I have something interesting to say, an outfit I particularly love, or if something exciting is happening in my life,’ she agrees. ‘I think people follow me because I’m living quite an ordinary life that they can relate to. Whenever somebody who follows me meets me in real life, they always say that I’m exactly the person they thought I was.’

However, as Randle notes, it’s important to appreciate the fine line between curation and making an effort – especially once you become recognisable. ‘I do not feel pressure… to maintain a certain image or lifestyle. [But] I used to run to the corner store looking any kind of way. I learned from that! Someone took a pic of me and posted, “We caught Grandad out and about.” When I saw that, I looked a mess. [Now] when I go into the public as a public figure, I make sure everything is in place.’

Meet the men over 50 proving age is just a number

While consumers are welcoming older influencers with open arms, it’s been a much slower story with respect to brands. Attitudes are shifting, but at a more gradual rate.

‘In 2014, I was asked by a brand not to use any pro-ageing hashtags or publicise the fact I was over 40,’ Garnett reveals. ‘That wouldn’t happen now, but lots of brands still shy away from using older women unless they’re including one to tick a box.’

In 2014, I was asked by a brand not to use any pro-ageing hashtags or publicise the fact I was over 40

Over in the US, Miles finds herself approached by a mix of brands. ‘Some approach me that are for the 50-plus market, but there are others where age is never even mentioned. Sometimes the brand will be a product for people my age – something anti-ageing, or anti-wrinkle. I like that, as it opens me up to more brand partnership opportunities.’

And even images posted by brands themselves can be quite ageist – purposefully or not. ‘I do see menswear companies on Instagram focus on a younger audience, rather than trying to attract an older (and arguably more affluent) demographic,’ remarks Evans.

It’s essential that mature influencers such as Miles, Evans, Randle and Garnett continue to bust stereotypes and highlight the positives that abound in the over-50 lifestyle; and, in turn, hopefully more will continue joining their ranks to up the ante.

‘I do my best to challenge all preconceptions of middle age,’ says Garnett. ‘Because those of us who are heading into it now are completely different to any generation that has gone before.’

As follower statistics and engagement figures reflect, when it comes to social media, age is ultimately nothing but another number. As Evans eloquently states: ‘Ageing is a continuum which we all follow, and there is nothing particularly different in human terms about someone who is 20 when compared with someone of 50. We all like similar things in life.’

So you want to be a mature influencer? How to get in on the ‘gram…

When posting on Instagram, authenticity is essential. But what else can you do to successfully venture into the world of influencing 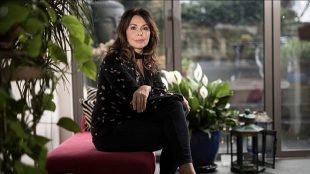