During my latest stay in hospital – the White Palace of Doom – I resolved to take minimum make-up, but make-up none the less. I would keep up standards for all women of the world! There is strength in vanity, so I thought.

But I had not predicted the lack of mirrors on the ward and the effects of major trauma and morphine on my creative skills. It turned out I didn’t wear make-up for weeks. Besides I was too busy dying, or so I thought. The thought of Death, it turns out, is a big threat to vanity. I gave no flying fucks about make-up.

It was interesting therefore how my personality (which I didn’t think I had without my make-up) and the wondrous personalities of the other inmates shone through. Female beacons in the darkness of pain and fear, without clothes, without make-up, without any sense of image or reflections from the mirrors of other people’s judgement.

Over the days I was to be met with the nonchalance of Amazons in adversity and it grew me.

One young girl; well educated, a dentist, struck down with a nasty ovarian cyst, reprimanded a registrar who had shown delusions of grandeur. I had already moaned at said registrar because the nurses were not letting me have water and I was upset and the registrar was giving off a superciliousness that was inappropriate.

But this Amazon did it properly, from a position of professional female qualification, a precision attack on the registrar’s bedside manner. I was so impressed. I had been hysterical! This girl was professional and damning even during an episode of great pain.

The needles and the knives you would think I am used to but no, they get worse as surgical momentum escalates

I have a life-long phobia of needles. It’s a pathetic state of affairs and I am unable to stop what occurs. The needles and the knives you would think I am used to but no, they get worse as surgical momentum escalates. My life is about needles and knives and I will never get used it, ever.

To get me through, I have taken to singing during my blood tests, and the other ‘inmates’ had been warned about the imminent X Factor bad singing… it’s actually more of a ‘lalalalalala’ mixed with screaming and moans rather than anything tuneful. I doubt it even helps me but one can’t help it with phobias, that’s the point.

Anyway, a beautiful lady across the ward, as my song of Hades began, accompanied my lalalalala, as loudly and with as much effort as I myself was putting in. Then the ward started along with her and it was the most wonderful distraction ever as we all sang loudly and out of tune.

This beautiful woman, in the deepest throes of advanced ovarian cancer, cared for me and my trauma

I can’t tell you how much that meant to me. This beautiful woman, in the deepest throes of advanced ovarian cancer and filling huge bags of bloody urine through her catheter by the hour, cared for me and my trauma. I was moved to tears and I will remember her for the rest of my life.

The thing with the oncology ward is that it needs to run smoothly and effectively and patients are unavoidably conveyor-belt treated. It is a busy hospital and patients need fast access, fast treatment and fast discharge. I would have been happy to lie there for months on the morphine but they stop your drugs and you have to get back to normal life at home…

Second morning after my surgery I was a mess. I fainted in the loo. I lost my phone as it had spun from my shaking hands under the sanitary bin. Fortunately another lady took control and despite just having her breast removed the day before and being in her 70s, found my phone. I already knew she was an Amazon. “What do I need my breast for at my age?” she had said, “the tumour is getting in the way of my pace maker.”

She went home that afternoon, there was her house and her husband to run.

For more from Pasha, you can find her writing regularly on her blog
www.pashaduvalentine.blogspot.com 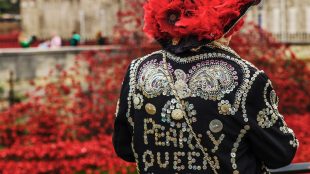 Behind the scenes with the Pearly Kings and Queens

What do you know about the Pearly Kings and [...]