The past few years have been massive for Nicole Kidman and today is her birthday. We catch up with her exclusively to find out how she’s doing

Nicole Kidman’s longevity in the film industry is a marker not only for age and experience, but the ability to choose scripts that inspire the actress as much as watching audiences, and she has already given as many bravura performances as any actor can rightfully be expected to deliver in one lifetime. But the last year or two has been an exceptionally rich period for the Australian star.

An Oscar nomination for Lion preceded not only her award-winning work in the critically-acclaimed HBO TV series but also two high profile indie films, The Beguiled, directed by Sofia Coppola, and controversial Greek filmmaker Yorgos Lanthimos’s The Killing of the Sacred Deer. She also has a key role in Jane Campion’s Top of the Lake.

Busy? You bet. But it is Kidman’s portrayal of battered wife Celeste in Big Little Lies that has set Hollywood on fire. Not only has it won her the Globe, it has earned her a best actress Emmy nomination, and many critics have argued that it is perhaps the finest work of her distinguished career.

Accepting her award last night, Kidman said, “The character I play represents something that is the centre of our conversation right now – abuse… I hope we can elicit change through the stories we tell and the way we tell them. Let’s keep the conversation alive. Let’s do it.”

What makes all this this particularly remarkable is that Nicole Kidman is winning such plaudits in a year that saw her turn 50, an age that often spells doom for female movie stars. But the industry is changing, and Nicole is taking advantage of this point in her career to test her limits even further.

“I’m blown away,” she says. “For all this confluence of events and success to be happening; that feels really powerful and makes me unbelievably thankful.

“I’m also anxious to keep taking more risks in my work than ever. I’ve always had the kind of attitude where I tell myself ‘why not?’ when it comes to working with new directors and wanting to explore different kinds of stories and characters, so that’s what I’m doing.

“Emotionally, I still feel so open and curious and want to always be jumping off the cliff with the abandonment of a 21-year-old. I’ve fallen off that cliff a few times,” she laughs. “But my husband reminds me I’m not a people-pleaser, because I say what I think and I don’t choose roles that are going to placate, and that’s just the way I was raised – to stand up for what you believe and not fit in.”

That attitude certainly applies to her film, The Killing of the Sacred Deer, in which she plays the wife of a surgeon (Colin Farrell), and watches as a strange 16-year-old boy enters their lives and exerts a mysterious hold on their family. Lanthimos (Dogtooth, The Lobster) is notorious for his profoundly disturbing narrative journeys and Kidman was anxious to enter his bizarre universe.

“When I was younger, I would try to fit into a formula, but that never worked for me”

“At this stage in my life I want to stay very bold and open, and try things and support filmmakers that I believe in. Yorgos (Lanthimos) is one of those directors who has a very unique filmmaking style- I’m totally up for taking risks… and supporting people who are trying different things.”

“When I was younger, I would try to fit into a formula, but that never worked for me. I was being advised to do big American movies, and as soon as I freed myself artistically to follow filmmakers and storyteller, I found my passion.”

An outspoken advocate for women’s rights and in particular a vociferous proponent of equal pay for women in Hollywood, Kidman applies her feminist mindset when co-producing Big Little Lies together with good friend Reese Witherspoon.

Based on the eponymous best-seller by Australian author Liane Moriarty, ‘Big Little…’ not only proved to be a massive critical success but has made TV history in that it was the first ‘lead’ series ever to feature five talented actresses – Nicole Kidman, Reece Witherspoon, Shailene Woodley, Laura Dern, and rising star Zoe Kravitz – in the main starring roles.

“There are five great roles here. For women, it’s very, very rare. I like working with women, but first of all I like to find the right stories. For years I’ve worked to support women in all fields. And I believe in sisterhood. I learned so much from having a feminist mother who in the 1960s who fought for our rights and has always been involved in social work. We are sisters in the world and we have to support each other.”

Playing the part of Celeste, a mother of twin boys married to Perry (Alexander Skarsgard), an abusive, jet-setting businessman, Kidman invested herself fully in a highly compelling and shattering role. Playing Celeste was far more physically and psychologically demanding than she expected, however.

“It is deeply disturbing playing her,” Kidman observes. “It’s a complicated character and I definitely felt the weight of it. A lot of times I can move away from the character very easily, yet this one I found a lot harder to move away from because it’s a very volatile relationship. They inflict pain on each other and there is an enormous amount of danger. At the end of a day’s shooting I’d go home, sit in the bath and cry.”

Celeste and Perry’s underlying relationship is fraught with psychodrama and that was part of what drew the fearless Aussie actress to the role in the first place: “We wanted it to be complicated. We didn’t want it to be black and white, because so many of these relationships are very complicated. There’s an addictive quality for them – the way in which they’re both culpable, and the way in which they can’t get away from each other, because there is love there… deep love. And they have two children. Which makes it even more difficult for her to see a way out.”

Kidman’s husband was shocked by the toll the series had on her. Nicole, however, wouldn’t have had it any other way

Her insistence on absolute realism not only impressed co-star Witherspoon and director Jean-Marc Vallée (Dallas Buyers Club), but also left Kidman’s husband, singer and former American Idol judge Keith Urban, who was shocked by the toll the series had on her. Nicole, however, wouldn’t have had it any other way. And now it’s back again!

“There’s certain choreography that you need for a violent scene, so that you don’t actually get your cheekbone shattered,” she admits. “But a lot of the time, they’d say, ‘Oh, you can put some pads in your back,’ and I would say, ‘no, because you might be able to see them’, and besides it wouldn’t have been ‘real’“.

After having numerous and lengthy conversations with victims of domestic abuse prior to the filming, she came away with a heightened appreciation of her marriage to Urban. Says Kidman: “Keith and I always say that we are just so lucky to have each other. In this world, to be able to come back to that love and that strength is so nourishing and powerful.”

Married to the singer for the past 11 years, Kidman is as devoted to their happiness as she is looking after their two daughters – Sunday, eight, and Faith, six. They live in Nashville, which is mecca to her husband and his country music roots. Urban is particularly proud of his wife’s work in Big Little Lies:

“Everything about it was done with such a raw authenticity,” he says. “It was extraordinary work and, for me, among some of Nic’s finest work ever. Some of the therapy scenes were just fantastic. What I love especially is it was all them, it was all the girls that made this happen. This wasn’t a project that got brought to Nic or Reese (Witherspoon). This was them — Reese — reading the book, Nic getting on a plane and flying to Australia to meet (author) Liane Moriarty and seeing if they can get their support in securing the rights in getting it made into a series.”

For her part, Kidman is happy that she and Urban have found a pleasant rhythm to their private and professional lives. “As an actress, you’re always trying to balance motherhood with the work you want to do,” Kidman explains. “I’m fortunate in the sense that I’m married to a musician, so our schedules are able to be juggled. I keep it simple in that regard.”

She adds: “I’ve worked a lot, but I don’t have to work. I work because it is still my passion.”

Long may it continue.

Big Little Lies is on Sky/HBO 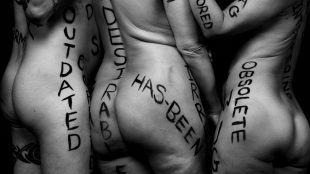 The Naked Truth. What are Boomers and Generation X really like?

We launched a survey to find out exactly who you [...]