Those that are childless through no choice of their own have not only to deal with heartbreak, they have to listen to other people’s opinions and platitudes. Bibi Lynch is childless, not by choice, and is here to let you know how this feels.

World Childless Week is a chance for the childless not by choice to share their experiences and to find their supportive tribe. And with one in three pregnancies ending in miscarriage, and one in five women reaching the age of 45 childless, that’s a lot of tribe to help and encourage and heal.

World Childless Week (WCW) is also an opportunity for me to publicly rail against the bigotry and cruelty thrown at the childless; to shine a blindingly obvious – to the unblinkered amongst us – spotlight on the horror of our situation. I’ll be delivering this in a manner so sweary and furious some of my fellow WCW Champions have nicknamed me The Warrior. I’ll fucking take that.

WCW is a week to talk about what being childless not by choice is like.

I need an extra seven days. Here’s how I’d fill them — teaching you about the traumas us childless face. I can’t go with ‘childfree’; I don’t feel liberated, I feel imprisoned by my loss. The pain and prejudice. I’m watching you, Austen.

‘Why don’t you adopt?’
Why don’t you try to understand the emotional process involved in accepting you won’t have your own biological child? And why don’t you also try to not see babies as commodities. A friend of a friend adopted and, one traumatic year later, ‘returned’ the child. It didn’t work out. Can you imagine her guilt? And worse, the child’s confusion and devastation? Kids aren’t shoes to be returned if they don’t fit. This isn’t a simple ‘fix’.

‘At least you can have a lie-in’
Hold my coat, Silver. I’m going in.

An (ex-)friend posted on Facebook about how tired he was. Because he was a parent. A woman commented: ‘A girl at work (no kids) said she was exhausted. I could’ve screamed!’

I too commented on the post: telling Screamer and my now-ex friend how ridiculous their words were. What, non-parents don’t get tired? Apparently, ex-friend told me, ‘The childless have a choice about getting out of bed or not.’

I didn’t realise that. How foolish I felt. I mean, sure, I often don’t sleep due to depression over not having children — and not wanting to dream (again) about holding my baby and waking up in visceral pain. And, yes, living with infinite grief is debilitatingly draining. Parents of course have the gorgeous joy of their gorgeous child to counteract their crushing tiredness. And, to add, when this all happened I was awake through the nights sitting with my dying uncle in his hospital room. But they’re right: I don’t have children and my enervation is not valid.

‘Look on the bright side’
Another ex-friend of mine – my age, 54, also with no children – took it upon herself to give me a pep talk.

‘We’re in the same position,’ she said, ‘and I’m happy. It’s about attitude.’

‘But you never wanted children,’ I replied.

‘But we’re in the same situation.’

‘But we’re exactly the same now. And I’m happy. Be positive!’ she sing-songed.

And she then did what she called ‘a positivity dance’ in front of me. Actually danced in front of my actual face.

I don’t hate many people. But her I hate.

‘It’s not for everyone’
I tell this story too often — but I cannot get enough of it. Because it is just so hideous. I was at a funeral and a woman I’d apparently met before came over to me. No ‘Hello’ or ‘How are you?’. None of that small talk. Maybe the buffet was calling so she went straight in.

We’re all lucky the casket was closed.

‘Have mine for a weekend. Haha!’
Shut up.

‘At least you don’t have stretch marks!’
I do.

Let’s not dwell on the numerous stories like that of a friend of a friend who, at her husband’s work do, meeting his colleague’s wife for the first time, had to endure the ‘Do you have children? No?’ *Poor Jen head-tilt* ‘I feel so sorry for you.’

And let’s swiftly move on from another FoF, 51, hugely successful lawyer, being asked, illegally, in a job interview why she hadn’t married or had kids.

And let’s instead land on this beauty. For it skilfully sums up the attitude of many towards the childless: they are so ‘less’ they aren’t even allowed to grieve. In her Dear Mariella column early this year, Ms Frostrup caused quite the agony in her response to a letter from a childless woman who was mourning her loss. Frostrup’s ‘advice’ was so smug, thoughtless and dismissive, I simply had to respond…

Why won’t you let your childless reader grieve?

I’m 53 [then], Mariella, and would say I’m pretty unshockable. But your column on Sunday – dismissing a grieving woman’s agony as a midlife crisis – drove me close to the Sertraline edge.

‘It sounds like a midlife crisis, so visit your GP and focus on what you’ve achieved — not what you haven’t’… And pick up some Diazepam whilst you’re there — for the childless not by choice women and men who are reading this and can’t quite believe the level of #AsAMother those words have hit.

Seriously? You’re seriously so entitled – what, the parents’ monopoly on exhaustion isn’t enough? – you can’t even recognise or acknowledge or allow a childless person’s grief?

Sick Of Saying This of Hove

DAY 3 — WHY NOT HAVING BABIES IS CRAP

Because it’s a pain and loss that is felt across your entire life: your past (you shake your head at every time you begged a man to be ‘careful’); your present (I’m 54 and it’s not my age that makes me invisible; it’s my not having children); and your future (no lineage… no place).

It’s the love. That’s why I fear I’ll never get over this. Society, history, and culture tell me that the love between mother and child is the most beautiful, fulfilling emotion in the world. That finally makes sense of your existence. ‘You’re playing a part in a much bigger show. And that’s what life is. It’s the greatest show on Earth’, said Beyoncé. Helpfully.

My first therapist, as I sobbed all over her couch, actually said to me: ‘You won’t heal – because this is deep in you. What you’re supposed to do. What’s inside us to do. And you didn’t do it.’*

Because they don’t want to hurt you and hate seeing you in such pain, they include you in ‘about to give birth’ WhatsApp groups. In this case, it’s kinder to ‘exclude’ the grieving.

Because they don’t want to hurt you and hate seeing you in such pain, they exclude you from Mother’s Day lunches. In this case, it’s kinder to include the woman who’s not a mum but has many roles in the family.

DAY 5 — WHY THIS CRAP NEVER ENDS

Because society won’t let it. There’s too much superior ‘hardworking families’ and #AsAMother ‘we matter more’ divisive point-scoring fun to be had.

What’s that about? The seeming resentment towards the childless? Is it fear of ‘other’? Do we, inadvertently, offer an alternative life that makes some parents question theirs and their happiness within? God – who doesn’t exist – knows.

But parents are right to dismiss me. I haven’t given birth so what do I know about providing for people, or loving them, or having compassion? As MP Andrea Leadsom brightly put it, childless Theresa May (and therefore all the childless) have no ‘tangible stake in the future’. Shall we club together and buy me a gun now? Or just use the maternity leave money I didn’t enjoy?

DAY 6 — WHICH BRINGS ME TO MORE ONGOING CRAP

I didn’t have children. So I won’t have grandchildren. It’s such an isolating feeling knowing my lineage begins and ends with me. I love my nieces and nephews. They love me. Some look like me. And that’s a joy but also more pain.

What would my child (Frankie. That was the name) have been like? Feisty and freckly like me? Or so the opposite I’d have wondered if I’d cheated with the milkman? Having children in your life who are almost yours is an odd place to be. They offer too many glimpses into what could have been.

And what role the non-grandparent? If the Lockdown news reports were anything to go by, the grandparent/grandchild love is profound and must not be disturbed. Even to save lives. (Come on. A few months with no cuddles? Try a lifetime.) And while we’re on Rona… Seriously that was the time to play the ‘parent’ card? The ‘If I see another childless person saying how stressed they are…’ posts were appalling. Yes, home-schooling and working from home must have been a nightmare. But one worse than the single person’s? Whatever issues you have, for most couples/families they are topped and tailed with company and love and protection and someone to share worries/fears/a debtors’ gaol cell with. This was not worse for parents. Honestly, some of you don’t know you’re born.

I’ve had a tough day. I’ve had to mute a friend’s Insta account because she’s just become a grandmother and her joyous, beautiful, photos and posts are too painful for me to read. 12 years of this grief and I’m still impacted like this. And there’s a new generation of babies now, the grandkids, who’ll only be talked about when I leave the room.

That’s tomorrow. That’s where I should start.

*Intellectually, of course I know we can be anything, anyone, and being a mother/grandmother isn’t the only ‘valid’ role — but my poor heart can’t fully absorb that. Yet.

Bibi is a journalist, writer and broadcaster. She presents shows on BBC Radio Sussex, BBC Radio Surrey and Soho Radio. She co-hosts Metro’s Good Sex Bad Sex podcast. She’s written features and columns for many publications: including the Guardian, Grazia and GQ. And other titles not beginning with ‘G’.

Bibi is a journalist, writer and broadcaster. She presents shows on BBC Radio Sussex, BBC Radio Surrey and Soho Radio. She co-hosts Metro's Good Sex Bad Sex podcast. She’s written features and columns for many publications: including the Guardian, Grazia and GQ. And other titles not beginning with ‘G’. 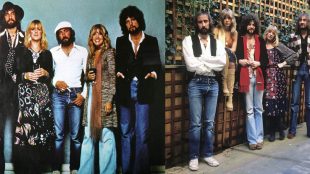 70s style is back, let’s all dress like Fleetwood Mac!